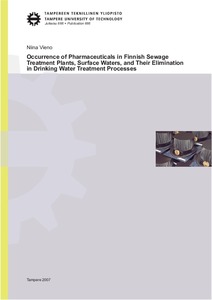 Pharmaceuticals are consumed in high quantities in the modern society and especially in industrialized countries. Residues of the consumed pharmaceuticals are carried to sewage treatment plants and can end up in the aquatic environment via discharges of the treated effluents to surface waters. In the environment, the compounds and there mixtures may cause adverse effects on aquatic organisms or they can be carried to drinking water treatment plants.


In this thesis, two analytical methods were developed to allow the determination of thirteen pharmaceuticals at low ng Lˉ¹ concentrations in environmental samples. These pharmaceuticals were: ciprofloxacin, norfloxacin and ofloxacin (antibiotics), carbamazepine (antiepileptic), diclofenac, ibuprofen, ketoprofen and naproxen (anti-inflammatories), and bezafibrate (lipid modifying agent). The methods included the following steps: isolation and concentration with solid phase extraction, separation by liquid chromatography and detection with triple quadrupole mass spectrometry. Quantification limits were 0.2 22 ng Lˉ¹ in drinking water and 3.5 163 ng Lˉ¹ in raw sewage. Sulfamethoxazole, an antibiotic, was also selected for the study but could only be analyzed at concentrations above 5 µg Lˉ¹. Hence, the compound could not be analyzed in the environmental samples. The methods were utilized to study the occurrence of the pharmaceuticals in raw and treated sewages, rivers and drinking waters in Finland. Additionally, the elimination of the pharmaceuticals was studied in different drinking water treatment processes.