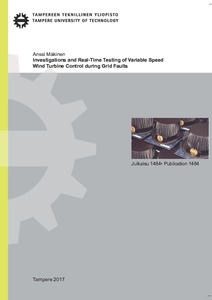 In this thesis, the operation of variable-speed wind turbines during the grid disturbances is studied. The main focus is on the low voltage ride-through (LVRT) of the full-power converter and doubly fed induction generator (DFIG) wind turbine concepts. Real-time simulators are utilized extensively in the research. The main research areas of this thesis are the operation of wind turbine synchronization during the grid disturbances, the operation of DFIG during symmetrical voltage dips and the feasibility of the constructed real-time simulation environment as well as real-time-simulator-based laboratory test environment for LVRT studies.

It is revealed that the synchronization of the control system has significant impact on the wind turbine performance under the grid disturbances. It is also shown that the incorrect synchronization design may cause the wind turbine to generate DC currents to the AC network during the symmetrical grid voltage dip. The real-time simulation environment, which consists of RTDS and dSPACE real-time simulators, is constructed and its operation is verified against respective simulations carried out with Matlab/Simulink. The environment is used to represent how the reactive power injection of DFIG during the symmetrical voltage dip can be enhanced by using a transient flux compensation control. In addition, it is pointed out that the voltage recovery after the grid fault may be significantly delayed due to the connection of a low-resistance crowbar protection device. Finally, the laboratory test setup consisting of a small-scale wind turbine prototype and RTDS-controlled grid emulator is constructed. The performance of the laboratory setup is analyzed in time and frequency domains and the main performance limitations are revealed.