Studies of the plasticity of transcription in Escherichia coli using single-molecule, in vivo detection techniques 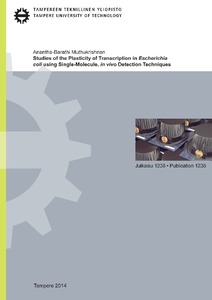 The phenotypic characteristics of living organisms are shaped by the interactions of the genotype with the environment. In their lifetime, organisms are subject to various environmental changes, some of which are stressful. They cope up with these by means of phenotypic plasticity. In prokaryotes, this plasticity is achieved mostly by rapid adaptations of the gene expression profile. To better understand this, it is critical to study the mechanisms by which these adaptations are implemented.
In Escherichia coli, transcription initiation is the first and most regulated step in gene expression. In vitro studies suggest that this is a complex, sequential process. Its rate-limiting steps regulate both the rate and the fluctuations of RNA production. These then determine the protein numbers and, thus, the cellular phenotype.
In this work, we make use of state-of-the-art techniques in microscopy imaging, image processing and molecular probing to perform a quantitative analysis of the in vivo dynamics of transcription initiation in different environments in the prokaryotic model organism, E. coli. From the measurements, we characterize the plasticity of this process. For this, we used MS2-GFP fluorescent tagging of mRNA that allows detection of single mRNA molecules with confocal microscopy, shortly after their production. We also developed a tool to automatically track cell lineages in a time-lapse movie, and extract the spatiotemporal distribution of fluorescently tagged molecules in individual cells.
From the analysis of the results, we show that, in vivo, the process of transcription initiation in E. coli is multi-stepped, as in vitro measurements had previously suggested. Also, the kinetics of each step can be independently controlled by different regulatory molecules. Further, the number and timing of the rate-limiting steps are affected by physiological changes that occur in cells when subject to changing environmental conditions. We conclude that the phenotypic plasticity of E. coli arises, partially, from the plasticity of the kinetics of the rate-limiting steps in transcription initiation.