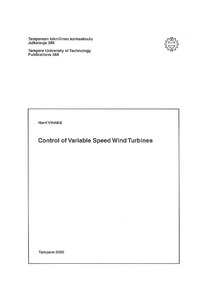 A variable speed, fixed pitch wind turbine is difficult to control: it is stable at below rated wind speeds but becomes unstable as power output is limited by stalling the turbine at above rated wind speeds. This turbine is suitable especially for small, sub-100 kW wind power plants as we can avoid the use of a costly and failure-prone pitch mechanism.

The aerodynamic torque of the turbine is considered a disturbance to be cancelled by feedforward control. The torque cannot be measured and is estimated by a Kalman filter as an extended state. The estimated aerodynamic torque is also used to define a rotational speed reference and to restrict the power input. In addition, a fuzzy controller is designed and compared to a previous one. A turbine and wind field are modelled for the Kalman filter to operate.

The Kalman filter yields a good estimate of rotational speed from noisy measurement. In laboratory tests, both 100 kW and 300 W generators and frequency converters were subjected to variable wind torque. Both control algorithms, feedforward and fuzzy, operated satisfactorily. The tests showed that a Kalman filter must be used to give the fuzzy controller a good estimate of aerodynamic torque. Power output was controlled at all above-rated wind speeds. In the small turbine, maximum power was also restricted from 300 W down to 50 W without problems. The small wind turbine was also tested in a wind tunnel and in field conditions.