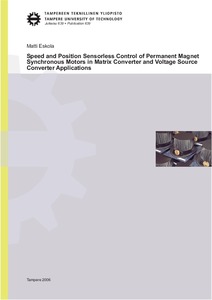 In this thesis the sensorless control of a permanent magnet synchronous motor (PMSM) is studied. The study has two main purposes. The first is to find a simple and effective method to estimate the rotor position and angular speed of the PMSM. The second is to test the applicability of a matrix converter in sensorless PMSM drives.


A matrix converter (MC) enables a direct frequency conversion without DC-link with energy storage. In this thesis two matrix converter topologies, direct and indirect, are studied. The vector modulation and the current commutation strategies of a matrix converter are described.


Non-ideal properties of frequency converters such as dead times, overlapping times and voltage losses over semiconductors are disturbances for a control system and position estimator. These non-idealities are studied and the properties of a conventional voltage source inverter are compared to direct and indirect MC topologies.


The rotor position and angular speed of the PMSM can be estimated by various methods. Estimators can be divided into model based estimators and signal injection estimators. Model based estimators calculate mechanical quantities using the mathematical representation of the motor. Injection methods usually exploit the saliency of the PMSM. Injected voltage creates currents which are modulated by the rotor position. The position information can be extracted from measured currents. In this thesis the best features of model based and injection estimators are combined. In the proposed hybrid method signal injection is used at low speeds and the transition to model based estimator is performed when the speed increases. The estimator methods used in the hybrid estimator are selected by a comparative analysis and simulations. The most important criteria in the selection of the estimator method in this thesis are: simple algorithm and no need for modification of the modulator software or frequency converter.


The suitability of the proposed hybrid estimator is tested by simulations and experimental tests in various operating conditions. To test the performance of the matrix converter the experiments are carried out using both MC topologies and a conventional voltage source converter.


The results obtained show that a matrix converter can be used in PMSM drives where the speed and position of the PMSM are not measured. The proposed estimator method is stable over the nominal speed range including the zero speed region with full load torque.