The Work of the Studio Aalto Collaborators: Practice, Craft and Theory 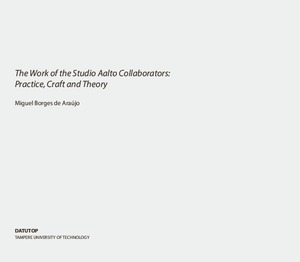 In 1954 Alvar Aalto built a new and larger studio building close to his existing combined home and studio in Munkkiniemi in Helsinki. The current study complements previous studies on the work produced at the so-called Studio Aalto over the next two decades by stressing its collective dimension and examining how in turn it was appropriated by the Studio collaborators.

This study is a combination of the history and theory of architecture and is structured thematically along three lines: practice, craft, and theory. The thesis as a whole is divided into 2 parts. Part I introduces and connects the work of the Studio with the work made independently by its members, a group of architects which has so far remained relatively unknown. A central question is thus whether these architects could continue the architectural profession at the level set out by the Studio. Part II concentrates on three case studies by members of the Studio: Jaakko Kontio (and Kalle Räike’s) Lappeenranta University of Technology (1969-1975); Kaarlo Leppänen’s Valkeakoski Cultural and Administrative Centre (1966-1973); Eric Adlercreutz (and Nils-Hinrik Aschan’s) Jägarbacken Housing in Ekenäs (1968-1973).

The point of view of practice shows the relationship between the architecture and the circumstances, allowing for the problematization of the changes associated with the emergence of a welfare state in post-war Finland. Kontio’s experience in university campus design is examined by considering the dialogues established with other people involved in the project. The point of view of craft emphasizes the action of successive generations upon the same material. Aalto’s sense of tradition provoked a revision within the Modern Movement, but also contributed to the isolation of the Studio within Finnish architecture circles in the late 1960s. To contrapose the progressivist bias at that time, Leppänen’s work is presented through a combination of technological and cultural approaches. In turn, theory is that part of architecture that can be discussed through ideas. The reconstitution of Adlercreutz’s Pattern Language studies, based on those of Christopher Alexander, establishes a triangulation that clarifies the Studio’s systematic and open method, thus helping to challenge the Studio’s reputation for neglecting theory. The comparisons show that each of the collaborators combined something of their experience with Aalto with their own individual experiences, and used this combined experience, moreover, to face partly new problems. Taken bidirectionally, the comparisons encourage a reconsideration of Aalto’s work and support my broader effort to confirm the continuity of architecture.