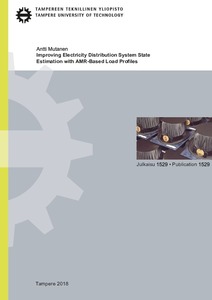 The ongoing battle against global warming is rapidly increasing the amount of renewable power generation, and smart solutions are needed to integrate these new generation units into the existing distribution systems. Smart grids answer this call by introducing intelligent ways of controlling the network and active resources connected to it. However, before the network can be controlled, the automation system must know what the node voltages and line currents defining the network state are.

The work done in this thesis can be divided into three stages. In the first stage, methods for creating new AMR-based load profiles are studied. AMR measurements from thousands of customers are used to test and compare the different options for improving the load profiling accuracy. Different clustering algorithms are tested and a novel twostage clustering method for load profiling is developed. In the second stage, a DSSE algorithm suited for smart grid environment is developed. Simulations and real-life demonstrations are conducted to verify the accuracy and applicability of the developed state estimator. In the third and final stage, the AMR-based load profiling and DSSE are combined. Matlab simulations with real AMR data and a real distribution network model are made and the developed load profiles are compared with other commonly used pseudo-measurements.

The results indicate that clustering is an efficient way to improve the load profiling accuracy. With the help of clustering, both the customer classification and customer class load profiles can be updated simultaneously. Several of the tested clustering algorithms were suited for clustering electricity customers, but the best results were achieved with a modified k-means algorithm. Results from the third stage simulations supported the main hypothesis that the new AMR-based load profiles improve the DSSE accuracy.

The results presented in this thesis should motivate distribution system operators and other actors in the field of electricity distribution to utilize AMR data and clustering algorithms in load profiling. It improves not only the DSSE accuracy but also many other functions that rely on load flow calculation and need accurate load estimates or forecasts.