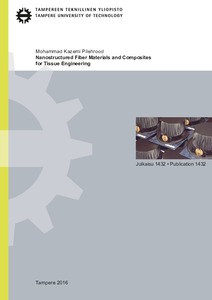 The demand for organ transplantation is increased day by day, highlighting the necessity for the development of tissue engineering as a part of strategic solution in medical treatments. Nanotechnology has brought a possibility to introduce materials, architectures and specific topographies required for the closet analogies in extracellar matrix (ECM) in native tissue. Among different nanostructured materials, electrospun nanofibers are recommended as an appropriate scaffold for tissue engineering due to their structural, biomedical and biophysical properties.

Polyacrylonitrile (PAN) nanofibers and carbon nanotube (CNT) reinforced PAN nanofibers were electrospun successfully. A polymer plasticiser, ethylene carbonate (EC), was added into the PAN/CNT solutions. It was observed that increasing the polymer concentration led to a reduction of beads density and an increase in the diameter of the PAN nanofibers. The fiber diameters also increased as a result of the addition of CNTs below the electrical percolation threshold. It was found that the inclusion of EC permits changes in the morphological characteristics of the PAN/CNT nanocomposite fiber regardless of the effects of its conductivity and viscosity.

3D nanofibrous chitosan-polyethylene oxide (PEO) scaffolds were fabricated by electrospinning using different processing parameters. The structural characteristics, such as pore size, overall porosity, pore interconnectivity, and scaffold percolative efficiency (SPE), were observed by using detailed image analysis. Mouse fibroblast cells (L929) were cultured in RPMI for 2 days in the presence of various samples of nanofibrous chitosan/PEO scaffolds. Cell attachment and the corresponding mean viability were enhanced from 50% to 110% compared to that of a control even at packed morphologies of scaffolds constituted from pores with nanoscale diameter. To elucidate the correlation between structural characteristics within the depth of the scaffolds’ profile and cell viability, a comparative analysis was proposed. This analysis revealed that larger fiber diameters and pore sizes can enhance cell viability. On the contrary, increasing the other structural elements such as overall porosity and interconnectivity due to a simultaneous reduction in fiber diameter and pore size through the electrospinning process can reduce the viability of cells. In addition, it was found that manipulation of the processing parameters in electrospinning can compensate for the effects of packed morphologies of nanofibrous scaffolds and can thus potentially improve the infiltration and viability of cells.

We present a new hybrid scaffold constructed by coating electrospun chitosan/polyethylene oxide (PEO) nanofibers on commercial BioTek polystyrene (PS) scaffold obtained from Sigma Aldrich. The viability and proliferation rate of mesenchymal stem cells (MSCs) seeded on micro-nano structured hybrid scaffold (MNHS) and commercial PS scaffolds were analyzed using the MTT assay. The results of the MTT assay revealed a higher degree of viability and proliferation rate in MSCs seeded on MNHS compared with the commercial PS scaffold. DAPI images also confirmed the higher degree of attachment and viability of MSCs seeded on MNHS. Moreover, MSCs on both scaffolds differentiated to osteoblasts and adipocytes cells, as reflected by the images obtained from Alizarin Red and Oil Red-O staining. Alkaline phosphatase activity (ALP) and calcium content assays revealed that the MNHS has a higher potential for osteogenic differentiation than the commercial scaffold. To quantify the osteoblast and adipocyte gene expression, quantitative RTPCR was carried out for MNHS, commercial scaffold and Tissue culture polystyrene (TCPS). It was found that MNHS can express a higher level of Runt-related transcription factor 2 (Runx2), osteonectin and osteocalcin in osteogenic differentiation as well as increased expression of PPARγ and UCP-1 in adipogenic differentiation. The enhancement of the attachment, viability and proliferation as well as bi-lineage differentiation may result from the biochemical and structural analogies of MNHS to native ECM. Furthermore, it was observed that biocompatible MNHS scaffold can potentially be utilized as a suitable scaffold for bone and connective tissue engineering.