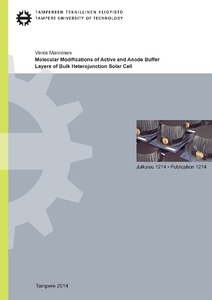 In this work, new photoactive materials were tested in the active and anode buffer layers of the inverted ITO|ZnO|donor:PC60/70BM|Buffer|Au/Ag organic bulk heterojunction (BHJ) solar cell. The molecular properties of the materials synthesized for this work were designed in order to improve the efficiency of the inverted solar cell structure. In addition to testing the materials in the cells, their effect on the cell function was investigated. The work aimed to understand the effects of the studied buffer and active layer materials in the cell function and photovoltaic performance.
Organometallic n-type tris-(8-hydroxyquinoline)aluminum (Alq3) derivatives, p-type aryl end-capped quaterthiophenes, and a combined p- and n-type Alq3 end-capped hexathiophene were tested as hole transporting anode buffer layer materials. As the various different materials provided a diverse buffer material selection, the properties of the materials for improved cell function were investigated by spectroscopic, electrochemical, computational and thermoanalytical methods.
The studied Alq3 derivatives have electron donating amino substituents, either piperidine, pyrrolidine or morpholine rings, on the 5-position of the 8-hydroxyquinoline ligands, which ease the oxidation of the complexes and elevate the highest occupied molecular orbital (HOMO) energy levels. The higher HOMO levels of the derivatives, compared to that of Alq3, reduce the hole extraction barrier in the cell. Therefore, the cells with the derivatives as buffer layers had a higher short circuit current (Isc) compared to that with Alq3. Simultaneously, due to higher hole injection barrier, the cells with the derivatives as buffer layers had lower open circuit voltage (Voc) than the cell with Alq3. The derivative with the morpholine ring has ideal energy levels with respect to the created energy barriers. Thus, the cell with the morpholine derivative as buffer layer performed better than the cell with Alq3.
The quaterthiophenes studied in this work have cyanophenyl or methoxyphenyl end-groups and methyl or hexyl side chains attached to the thiophene backbone. These structural differences affect their electronic distribution, absorption profile, energy levels and molecular packing, especially in the solid state. The use of p-cyano end-capped quaterthiophene with hexyl side chains as an anode buffer layer resulted in a better cell power conversion efficiency compared to that with Alq3. The use of the Alq3 end-capped hexathiophene as an anode buffer layer decreased the cell serial resistance (Rs) and increased Isc. Photoinduced reactions, such as energy or electron transfer, between the Alq3 or aryl end-capped oligothiophene buffer materials and photoactive layer partly explain the improved Isc.
A synthesized benzodithiophene-benzotriazole donor-acceptor (D-A) copolymer was compared as donor material with three previously studied fluorine-benzotriazole D-A copolymers. The relation between donor polymer structural properties and photovoltaic performance was studied by combining computational and experimental methods. The cell with the benzodithiophene-benzotriazole copolymer as donor material had better efficiency than the cells with the fluorine- benzotriazole copolymers. Calculations on the molecular geometry, energy levels, molecular orbitals, and lowest energy excitations provided an additional perspective to understand the polymer’s function as donor material. Based on the calculations, the benzodithiophene-benzotriazole copolymer had a more planar backbone, continuous LUMO electron density, longer conjugation and better exciton and charge transport properties compared to those of the fluorine-benzotriazole copolymers. Bulky side groups in the fluorine-benzotriazole copolymers caused steric hindrance and twisting or bending of the backbone. As a result, the electron density concentrates in parts of the polymer structure and π-conjugation weakens or is broken. As the delocalization does not cover the whole polymer structure, excitons or charges are trapped in the gaps of the discontinuous molecular orbitals.
Alq3, aryl and 8-phenoxyquinoline end-capped oligothiophenes were used as dopant materials in the P3HT:PC60BM BHJ photoactive layer. In the ternary blend of the dopant, P3HT and PC60BM molecules, intermolecular interactions are likely as the molecules are in close proximity in the solid photoactive layer. The effect of dopant molecules on the cell function was studied by solar cell experiments. To investigate the intermolecular interaction of the dopant molecules with the active layer components, P3HT donor and PC60BM acceptor, steady state and time resolved spectroscopic measurements were carried out in chloroform solutions. Based on the measurements, Alq3 end-capped hexathiophene donates an electron to PC60BM. Photoinduced energy transfer was observed between the cyanophenyl end-capped quaterthiophene and PC60BM.
The cell absorption increases with doping. Thus, dopant molecules function as additional light absorbers in the photoactive layer. After excitation, the dopant molecules transfer electrons or energy to PC60BM, which increases the cell Isc and power conversion efficiency. When a cyanophenyl end-capped oligothiophene with diketopyrrolopyrrole (DPP) core was used as dopant, the cell emission decreased. DPP-group inclusion broadens the dopant absorption to the near IR-region. Therefore, the absorption of the dopant overlaps with P3HT emission and the dopant molecules can reabsorb the light emitted by P3HT. In this case, the cell Isc and power conversion efficiency increased further.