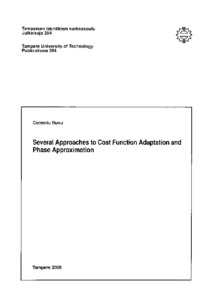 In the particular application of data echo cancellation we have a signal environment which violates basic assumptions inherent in adaptive estimation theory. First, the training signal is noise dominated (by the far end signal), and second, the noise statistics are non-Gaussian. The second fact tends to suggest that least squares optimisation is not optimal for this case. Previous work has shown that considerable performance enhancement is possible by the use of high order metrics (of order greater than 3). However, the exact metric to be applied depends on the channel dispersion. Therefore the logical solution is to use an adaptive error metric which changes dependent on the actual error statistics. As in the case of variable step-size algorithms, the optimum cost function adaptation algorithm requires complete knowledge of the signal and system statistics and thus it cannot be implemented in most practical conditions. In the first part of this thesis, the solution for this kind of situation is examined. The main goal is to derive a stochastic gradient algorithm for the case of data echo cancellation in which the error exponent is adjusted using the value of the error.


The idea behind the first approach relies on adjusting the error exponent parameter during the adaptation by enforcing same value of gradients for two consecutive error exponents. Two different type of algorithms are proposed: the staircase and the smooth CFA (Cost Function Adaptation) algorithms, and it is shown that they behave with comparable results.


Then the gradient approach is derived by enforcing the same direction of the gradient as in the case of non-quadratic algorithms. As a special case the linear adaptation of the power of the cost function results.


In the recursive cost function adaptation case, the new error exponent is computed from the previous one using a customary LMS (Least Mean Square) recursive equation. This method improves the sensitivity of the power of the cost function with respect to the noisy error, while the other benefits of the CFA algorithms in terms of the convergence speed and residual error remain.


The second part of the thesis deals with a special form of Hilbert transform, known as Bode gain-phase relationships. Here the interest is to develop formulae for phase approximations by gain samples, equally separated in logarithmic domain. Our approach consists of the following steps:


First we discuss the most important theoretical results related to our specific subject. Sampling in logarithmic domain is pointed out as a more general rule, not necessarily only for the presented case.


Then we establish new relationship for computing the phase of the minimum-phase functions from the gain derivatives, as a first advance to approach phase by gain samples. As a beginning, we show that for a given frequency the phase could be obtained from the odd derivatives of the neperian gain, evaluated for this frequency. Then we select a finite number of terms of the main formula and we derive an approximation of phase. We show that the approximations derived can be improved by taking into account the Gibbs phenomenon and the Feher kernel.


Finally we derive a completely novel relationship for approximating the phase values from the gain samples, in nepers, equally spaced in the logarithmic frequency domain. A general approximation formula is proved, then two quadrature formulae are obtained using Newton-Cotes and Simpson rules. Numerical examples are also provided to emphasize the achievements of the method.