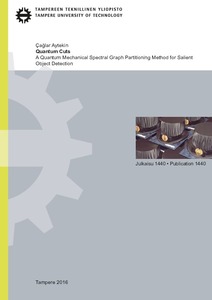 The increasing number of cameras, their availability to the end user and the social media platforms gave rise to the massive repositories of today’s Big Data. The largest portion of this data corresponds to unstructured image and video collections. This fact motivates the development of algorithms that would help efficient management and organization of the Big Data. This processing usually involves high level Computer Vision tasks such as object detection and recognition whose accuracy and complexity are therefore crucial. Salient object detection, which can be defined as highlighting the regions that visually stand out from the rest of the environment, can both reduce the complexity and improve the accuracy of object detection and recognition. Thus, recently there has been a growing interest in this topic. This interest is also due to many other applications of salient object detection such as media compression and summarization.

This thesis focuses on this crucial problem and presents novel approaches and methods for salient object detection in digital media, using the principles of Quantum Mechanics. The contributions of this thesis can be categorized chronologically into three parts. First part is constituted of a direct application of ideas originally proposed for describing the wave nature of particles in Quantum Mechanics and expressed through Schrödinger’s Equation, to salient object detection in images. The significance of this contribution is the fact that, to the best of our knowledge, this is the first study that proposes a realizable quantum mechanical system for salient object proposals yielding an instantaneous speed in a possible physical implementation in the quantum scale.

The second and main contribution of this thesis, is a spectral graph based salient object detection method, namely Quantum-Cuts. Despite the success of spectral graph based methods in many Computer Vision tasks, traditional approaches on applications of spectral graph partitioning methods offer little for the salient object detection problem which can be mapped as a foreground segmentation problem using graphs. Thus, Quantum-Cuts adopts a novel approach to spectral graph partitioning by integrating quantum mechanical concepts to Spectral Graph Theory. In particular, the probabilistic interpretation of quantum mechanical wave-functions and the unary potential fields in Quantum Mechanics when combined with the pairwise graph affinities that are widely used in Spectral Graph Theory, results into a unique optimization problem that formulates salient object detection. The optimal solution of a relaxed version of this problem is obtained via Quantum-Cuts and is proven to efficiently represent salient object regions in images.

The third part of the contributions cover improvements on Quantum-Cuts by analyzing the main factors that affect its performance in salient object detection. Particularly, both unsupervised and supervised approaches are adopted in improving the exploited graph representation. The extensions on Quantum-Cuts led to computationally efficient algorithms that perform superior to the state-of-the-art in salient object detection