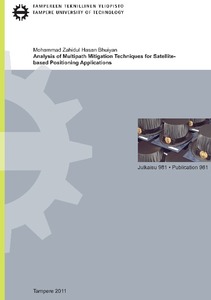 Multipath remains a dominant source of ranging errors in any Global Navigation Satellite System (GNSS), such as the Global Positioning System (GPS) or the developing European satellite navigation system Galileo. Multipath is undesirable in the context of GNSS, since the reception of multipath can create significant distortion to the shape of the correlation function used in the time delay estimate of a Delay Locked Loop (DLL) of a navigation receiver, leading to an error in the receiver's position estimate. Therefore, in order to mitigate the impact of multipath on a navigation receiver, the multipath problem has been approached from several directions, including the development of novel signal processing techniques. Many of these techniques rely on modifying the tracking loop discriminator (i.e., the DLL and its enhanced variants) in order to make it resistant to multipath, but their performance in severe multipath scenarios is still rather limited. In this thesis, the Author particularly addresses the challenge of overcoming the difficulties due to multipath propagation by developing several novel correlation-based multipath mitigation techniques, ranging from simple DLL based approach to advanced multi-correlator based solution, whichever is appropriate according to the requirements of positioning applications (i.e., low-cost simpler implementation versus better accuracy). The proposed novel multipath mitigation techniques can be categorized into three major categories considering their implementation complexity: i. the advanced technique, which requires many correlators and have relatively complex implementation; ii. the simple technique, which requires only a few correlators; and iii. the combined technique, which is a combination of two other techniques and has moderate complexity.
The proposed advanced multipath mitigation techniques include Peak Tracking (PT) and its variants based on 2nd order Differentiation (Diff2) and Teager Kaiser (TK) operator, non-coherent Multipath Estimating Delay Lock Loop (MEDLL) and Reduced Search Space Maximum Likelihood (RSSML) delay estimator. The development of these advanced multipath mitigation techniques are justified from the fact that they provide better tracking accuracy in harsh multipath environments, for example, in urban canyons, at a cost of increased implementation complexity. Among all these techniques, RSSML offers the best multipath mitigation performance in moderate-to-high C/N0 scenarios, as verified by the simulations in multipath fading channels. Therefore, RSSML along with other advanced techniques proposed in this thesis can be considered as excellent candidates for implementation in professional GNSS receivers, especially when the tracking accuracy is a concern.
The proposed simple multipath mitigation technique includes a Slope-Based Multipath Estimator (SBME), which requires a-priori information about the slope of the correlation function and an additional correlator (as compared to a traditional DLL) to estimate the multipath error. Simulation results show that SBME has superior multipath mitigation performance to the well-known narrow Early-Minus-Late (nEML) DLL in tested environments.
The proposed combined techniques include a C/N0-based two-stage delay tracker and a combined TK operator with nEML DLL. The motivation for having a combined approach is to ensure a better tracking performance with a reasonable implementation complexity than each single combining method that is used to form the combined multipath mitigation technique. The C/N0-based two-stage delay tracker offers a better tracking accuracy than its individual counterpart in multipath channel, as validated by the simulations in an open source TUT (Tampere University of Technology) Galileo E1 signal simulator. It also alleviates the problem of false tracking involved in High Resolution Correlator (HRC). Hence, the C/N0-based two-stage delay tracker can be considered as a viable solution for legacy GNSS receivers which are currently using nEML or HRC as their delay locked loop discriminator.
The multipath performance of all the novel and the state-of-art techniques is analyzed for three different GNSS signals, namely legacy GPS L1 C/A signal, Galileo E1 Open Service (OS) signal and the modernized GPS L1C signal. However, this does not restrict the applicability of these techniques in the context of other GNSS signals (for example, Galileo E5 signal) as long as they are adapted considering the signals' auto-correlation properties.
This thesis is structured in the form of a compound, including an introductory part in the research field and a collection of eight original publications of the Author, where the main contribution of the thesis lies.