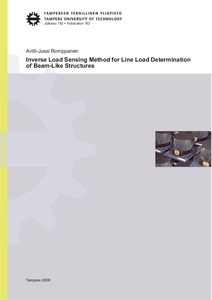 In this thesis, an inverse load sensing method is developed and investigated. Accordingly, it is found that strain measurements of a beam-like structure can be utilized in order to solve the actuating line load distribution. The feasibility of the method, especially for rotating beams is evaluated.

The main applications of the method are in paper manufacturing processes, in which the paper web is pressed between rotating rolls and a line load distribution is created in the cross direction of the contact zone. The line load is particularly important, since it controls the surface properties of the paper, and is typically very difficult to measure accurately. In the contact zone, not only the paper, but also the rolls, are significantly influenced by the line load and experience considerable bending and flattening deformations. Thus, based on measurement of the strain of one of the rolls, the proposed method could be used to determine the governing line load distribution. Furthermore, the method could also be applied to other types of beam-like structures, for which the loading has to be determined.

The strain-force relationship of the given structure is described by an influence coefficient matrix, which is formed by means of an appropriate unit load procedure. Since the loading input of the structure is determined on the basis of the strain response it produces, the proposed method is inverse. As is often the case in inverse problems, the system equations are found to be ill-posed, therefore, small errors in the measured input cause large deviations in the solution. Thus, the quality of the solution is improved by introducing a suitable regularization technique.

The feasibility of the inverse load sensing method is first verified in two experimental cases of static point forces acting on beam-like structures. Then, two different approaches and the applicability of the method are evaluated with a purely computational analysis of a case, in which the line load distribution acts on a static beam-like roll structure. Finally, the feasibility of the method is tested on a real dynamic application of a pilot roll press. Strain gages are installed onto the inner surfaces of one of the rolls to give the needed strain data during a run. With appropriate conditions and adaptations, the proposed load sensing method can be utilized. The results were promising, although the implementation of the method should be carefully evaluated according to the requirements of the application.