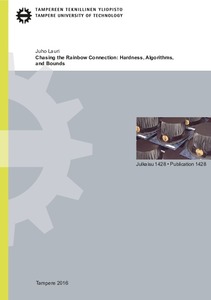 We study rainbow connectivity of graphs from the algorithmic and graph-theoretic points of view. The study is divided into three parts. First, we study the complexity of deciding whether a given edge-colored graph is rainbow-connected. That is, we seek to verify whether the graph has a path on which no color repeats between each pair of its vertices. We obtain a comprehensive map of the hardness landscape of the problem. While the problem is NP-complete in general, we identify several structural properties that render the problem tractable. At the same time, we strengthen the known NP-completeness results for the problem. We pinpoint various parameters for which the problem is ﬁxed-parameter tractable, including dichotomy results for popular width parameters, such as treewidth and pathwidth. The study extends to variants of the problem that consider vertex-colored graphs and/or rainbow shortest paths. We also consider upper and lower bounds for exact parameterized algorithms. In particular, we show that when parameterized by the number of colors k, the existence of a rainbow s-t path can be decided in O∗ (2k ) time and polynomial space. For the highly related problem of ﬁnding a path on which all the k colors appear, i.e., a colorful path, we explain the modest progress over the last twenty years. Namely, we prove that the existence of an algorithm for ﬁnding a colorful path in (2 − ε)k nO(1) time for some ε > 0 disproves the so-called Set Cover Conjecture.

Second, we focus on the problem of ﬁnding a rainbow coloring. The minimum number of colors for which a graph G is rainbow-connected is known as its rainbow connection number, denoted by rc(G). Likewise, the minimum number of colors required to establish a rainbow shortest path between each pair of vertices in G is known as its strong rainbow connection number, denoted by src(G). We give new hardness results for computing rc(G) and src(G), including their vertex variants. The hardness results exclude polynomial-time algorithms for restricted graph classes and also fast exact exponential-time algorithms (under reasonable complexity assumptions). For positive results, we show that rainbow coloring is tractable for e.g., graphs of bounded treewidth. In addition, we give positive parameterized results for certain variants and relaxations of the problems in which the goal is to save k colors from a trivial upper bound, or to rainbow connect only a certain number of vertex pairs.