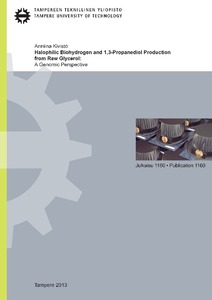 Glycerol is produced in large amounts as a by-product in biodiesel industry (10 kg per 100 kg biodiesel). By-products and waste materials are typically economical substrates for bioprocesses. Furthermore, microorganisms are able to combine the degradation of organic material with production of a wide range of metabolites and other cellular products. The current biotechnological interest of industrial glycerol lies on bioprocesses yielding environmentally friendly energy carrier molecules (hydrogen, methane, ethanol, butanol) and reduced chemicals (1,3-propanediol, dihydroxyacetone). Industrial glycerol also called as raw or crude glycerol, however, is a challenging substrate for microorganisms due to its impurities including alcohol, soaps, salts and metals. Halophiles (the salt-loving microorganisms) require salt for growth and heavy metal resistances have been characterized for numerous halophiles. Therefore, halophiles are potentially useful for the utilization of raw glycerol from biodiesel waste streams without pre-processing.

Another challenge for large-scale microbial bioprocesses is a potential contamination with unfavorable microorganisms. For example, H2-producing systems tend to get contaminated with H2-consuming microorganisms. Extremophiles are organisms that have been adapted for life under extreme conditions, such as high salinity, high or low temperature, asidic or basic pH, dryness or high pressure. For extremophilic pure cultures contamination and thus the need to ensure a sterile environment might not be a problem due to the extreme process conditions that efficiently prevent the growth of most other bacteria. In addition, hypersaline environments (above 12 % NaCl) do not support the growth of H2 utilizing methanogens due to bioenergetic reasons. Halophilic fermentative H2 producers, on the other hand, have been shown to be active up to near salt saturation.

The aims of the present study can be divided into two categories: 1) to develop an open raw glycerol degrading bioprocess primarily for H2 (clean and renewable energy carrier molecule) and secondarily for 1,3-PD (component of biopolymers) production employing halophilic pure cultures and 2) to obtain information on the genome of salt-tolerant organisms, halophilic survival strategies, and fermentation pathways via whole-genome sequencing.

The genome of H. saccharolyticum subsp. saccharolyticum was sequenced and analysed on genetic level for phylogenetic and physiological characteristics, fermentation pathways as well as for resistances for metals, antibiotics and other toxic compounds. The genome sequence analysis revealed four putative hydrogen producing enzymes and a range of putative genes causing resistance for variety of antibiotics, heavy metals and other toxins.

In conclusion, an open anaerobic bioprocess is applicable for halophilic pure cultures with no adverse contaminations. Additionally, H. saccharolyticum subsp. saccharolyticum is capable for direct utilization of the by-product from biodiesel production process and high-yield production of H2 and/or 1,3-PD. The genome sequence data provides insight into the relatively little-studied group of halophilic fermentative bacteria on genetic level.