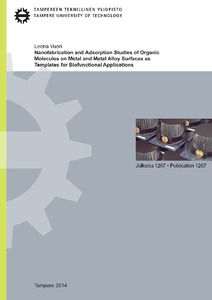 Trimesic acid (TMA) and glycine adsorption on single crystal Cu(100) surface was investigated with PES and scanning tunnelling microscopy (STM). TMA on Cu(100) exhibits coverage dependent surface phases with drastic changes in the molecular orientation. The mobile TMA molecules at low coverage transform into Cu atom coordinated TMA networks and finally into carboxyl (COOH) functionalized, densely packed TMA monolayers. This is enabled due to three equivalent COOH groups symmetrically around a rigid benzene ring. Homo- and heterochiral surface phases of achiral glycine on Cu(100) were observed, and a new structural model for glycine bonding on Cu(100) based on STM and density functional theory calculations is presented. The coadsorption of aminopropyl trimethoxysilane (APS) and mercaptopropyl trimethoxysilane (MPS) on stainless steel was studied with an aim to incorporate MPS in APS matrix with tuneable distribution.

In addition to the determination of elemental and chemical states at the surface, PES data was also used to determine the surface morphology by employing inelastic electron energy-loss background analysis. Synchrotron radiation mediated PES enabled the study of the in-depth distribution of the chemical states in non-destructive manner. The functionality of the APS/MPS overlayers on stainless steel was studied with chemical derivatization.

The studies of TMA and glycine on Cu(100) provide important knowledge of the adsorption behaviour of small molecules on surfaces, which is crucial for understanding the adsorption phenomena of larger molecules, such as proteins on more complex substrates. The fabricated surface structures may also be applicable to molecular electronics or catalytic surfaces. The bifunctional silanization of stainless steel, on the other hand, is directly transferrable to industrial scale processes. The bifunctional APS/MPS nanomolecular layer on stainless steel works as a template, to which biomolecules can be covalently coupled with tuneable distribution. Hence, the stainless steel surface can be biofunctionalized for a range of applications, depending on the properties of the biomolecules.