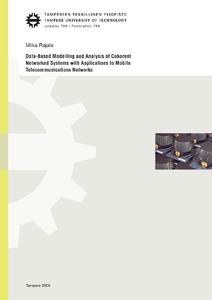 Due to interactions of nodes, a networked system may behave coherently with the nodes collaborating to perform a joint task, such as transferring speech and data traffic in a mobile telecommunications network (MTN). On one hand, coherence may lead to high network performance and an ability to withstand high external node loadings caused by the traffic. On the other hand, however, because of coherence, a network may exhibit such qualitative properties that lead to a drastic sensitivity of the network to even smallest node loading changes under a high loading. At worst, such sensitivity may lead to a coherent collapse of the entire network and thereby to severe financial and quality-of-service related losses. This thesis examines interacting coherent networks with a focus on MTNs and aims to provide information through statistical modelling for supporting the decision making of network operators and helping to improve the network robustness against unexpected node failures or excessive local node loadings.

In this thesis, Markov random fields (MRFs) are applied as statistical collaborative models of networked systems, describing a network through the joint probability of network node states. Instead of trying to model the exact dynamics of complex networked systems, which is extremely difficult, MRF models provide all the uncertainty information related to the network state under given conditions. Ising model, a simple MRF model, is adopted to model the joint probability of network node states under given external node loadings. Though it describes nodes in binary states, the Ising model is highly capable of describing the behaviour of complex coherent networks and thus proper, e.g., to study the qualitative properties of MTNs.

To study the qualitative properties of an identified Ising model, Markov chain Monte Carlo (MCMC) methods are used for model simulation under varying uniform node loading and local excessive node loading situations. Moreover, MCMC simulations are applied for studying the adiabatic and transient dynamics of the Ising model. By using the MCMC methods for generating samples from an identified Ising model, the identification methods are tested extensively with MCMC-generated synthetic data in varying qualitative network behaviour cases. By using real MTN data, the model identification methods are finally tested in a realistic case.