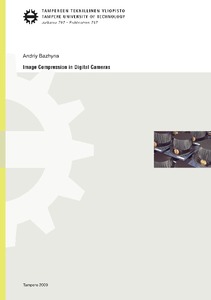 The usage of digital cameras is continually increasing. The digitalcamera applications range from entertainment to science. Due to easiness of use, innumerable digital images are produced.
A digital camera is a complex optoelectronic device capable of performing image capturing and reconstruction. Light is transformed to electric form by silicon sensors. The quantized electrical signals acquired by the sensor are called "raw" data. The captured raw data are different from the original scene sensation. Sophisticated reconstruction procedures are used to produce final images from the raw data. Due to limited resources, it is not always possible to implement the best algorithms inside the camera. To overcome this limitation, storing original raw data and subsequent reconstruction on powerful devices are used.
In uncompressed form, both raw and image data, occupy an unreasonably large space. However, both raw and image data have a significant amount of statistical and visual redundancy. Consequently, the used storage space can be efficiently reduced by compression.
In this thesis, image data compression for digital cameras isstudied. The problem is divided into two subcategories: raw data compression and compression of reconstructed images.
Compression of raw data is a relatively new research area. In this thesis, we describe peculiarities of raw data and introduce a problem of raw data compression. Similarly to image compression, the methods for raw data compression are categorized into lossless, near-lossless and lossy. We describe the applicability of different compression techniques for raw data. Approaches to performance evaluation of compression methods are presented. In addition, we propose algorithms for lossy, near-lossless and lossless compression. All our algorithms take the peculiarities of raw data into account. Since raw data are always contaminated by noise, special attention is paid to compression of noisy data. We propose a lossy compression method, where the compression errors can be masked by noise present in raw data.
Image compression has been a field of intensive investigation for several decades. In this thesis we argue for the usage of DCT block-based algorithms for image compression in digital cameras. An efficient method for compression of the quantized DCT coefficients is proposed. In addition to high coding efficiency, it allows other services, e.g. progressive coding, spatial and complexity scalability, ROI, etc. The image coder with the proposed encoding method demonstrates compression efficiency similar to JPEG2000. Furthermore, the utilizations of our encoding technique for the additional lossless compression of JPEG images and for the compression of 3D DCT coefficients are proposed.
An efficient method of prediction and compression of sign values of DCT coefficients in block-based image compression is also proposed in this thesis.