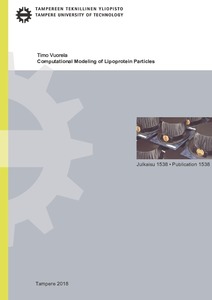 Ischemic heart disease and stroke are the leading causes of death in the industrialized countries. The driving mechanism behind these diseases is the atherosclerotic process leading to narrowing of the arteries and eventually a reduction of blood supply to the target organs. Lipoproteins known as carriers of cholesterol play an essential role in that process. However, despite intensive research over more than 100 years, the molecular level structure and function of lipoproteins are not fully understood. This largely stems from the fact that due to the small size and the dynamic nature of lipoproteins, experimental techniques are not able to gauge lipoprotein structure and dynamics in sufficient detail. Meanwhile, molecular dynamics (MD) simulation has proved to be a powerful and simple method to explore the properties of various biological systems and to overcome many limitations of experimental techniques. In this thesis, the MD method was used to study lipoproteins at the molecular level. To this end, coarse-grained molecular models for high- and low-density lipoprotein (HDL and LDL, respectively) particles were constructed to study their structure and dynamics. Further, atomic-scale models were used to study the interaction between HDL and CETP, a lipid transfer protein. Finally, atomic simulations were also employed in a lipoprotein-like environment to assess the validity of using BODIPY, a common molecular probe, to explore lipoprotein properties.

The ﬁrst key result of this thesis is the detailed structural model found for both HDL and LDL, showing that the previously proposed 2- and 3-layer models are inadequate for describing lipoprotein structure to a sufficient degree. It was found that the structural and dynamic properties of lipids hosted by lipoproteins depend significantly on their location and distance from the center of the particle. Second, this thesis work revealed the mechanism and the residues involved in anchoring CETP to the surface of lipoprotein particles. Also, the critical role of helix X as a door to the hydrophobic tunnel carrying the cargo lipids was clariﬁed. Third, based on BODIPY-simulations reported in this thesis one can conclude that BODIPY-labeled cholesteryl oleate is not a suitable probe for experimental cholesteryl oleate tracking studies in lipoprotein environments. It appears that a successful probe in a lipoprotein environment should have no signiﬁcant affinity for the hydrophilic surface region.

The ﬁndings give a solid grounds for further studies to explore the key initial steps associated with atherosclerosis and also the molecular-level events in the lipid exchange processes. For future purposes, this work demonstrates that the used simulation methods are particularly useful for studies of, e.g., the coupling between the lipid composition of lipoprotein particles and their structure and function.