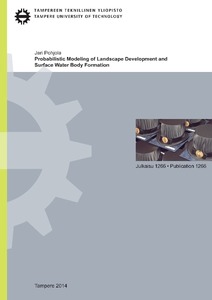 Biosphere development estimation is a major factor in assessing the long-term safety of a final repository of spent nuclear fuel in the time scale of thousands of years. In this thesis the future evolvement of the Olkiluoto modeling area, situated in Western Finland, is studied. The main reason for the change in the landscape is the ongoing post-glacial uplift. Due to this uplift, the shoreline will be shifted westwards by several kilometers during the next 10 000 years. The focus of the study is on the newly formed surface water bodies since they are the most significant carriers of radiating particles in potential risk scenarios of canister failures.

The thesis has been divided into three parts: 1) creation of a probabilistic digital elevation model, 2) optimization of the components and parameters of a mathematical land uplift model and 3) estimation of surface water body formation based on the aforementioned models. The probabilistic digital elevation model is created using measurement data from numerous sources. Thin plate spline method is used for interpolation and the uncertainties in the source data are taken into account using Monte Carlo simulation. The mathematical land uplift model used in the thesis is based on past shore level information. An alternative eustatic model, using more precise data from the Baltic Sea area, and updated ice retreat and crust thickness models are presented to be used in the land uplift model optimization process. The parameters of the land uplift model are optimized using data from past shore level displacement and archaeological findings. The parameter optimization is done in a probabilistic way using Monte Carlo simulation.

The probabilistic digital elevation and land uplift models are combined in the surface water body estimation where four main lakes are shown to be formed in the vicinity of the present Olkiluoto Island. The study results reveal that the landscape development tracks produced by the different modeling schemes estimated using alternative eustatic models are mostly similar indicating the robustness of the modeling.