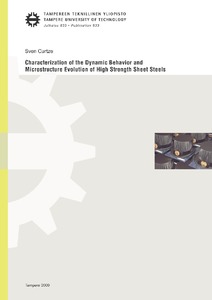 The use of modern high strength steels enables automotive producers to notably reduce the vehicle body mass and this way meet today’s fuel efficiency and green house gas emission requirements without compromising structural integrity and passenger safety. With new steel generations under development, further mass reductions as well as reductions in production costs are in sight. The superior mechanical properties of these steels, which are classified under the name advanced high strength steels (AHSS), are a result from advanced microstructure design, which in many cases utilizes complex deformation and/or phase transformation processes in the material. Some of the most prominent representatives of the group of AHSS are dual phase (DP) and transformation induced plasticity (TRIP) steels, as well as the more recently developed high manganese twinning induced plasticity (TWIP) steels.
The stress-strain response of these materials at high strain rates is particularly interesting and important, on the one hand from a practical point of view, e.g., in a car crash event or in high rate forming processes, and on the other hand from a purely scientific point of view. The same argument basically also applies to the effects of temperature on the mechanical properties of theses steels. While the deformation mechanisms of materials deforming solely by dislocation glide are widely understood, as well as their dependence on temperature and strain rate, the mechanical behavior of materials additionally undergoing phase transformations and/or twinning is much more complex.
In order to better understand the role of phase transformations and/or twinning during plastic deformation of AHSS under varying deformation conditions, a DP 600 and a TRIP 700 steel were studied by mechanical tests in a strain rate range of roughly 0.001/s - 10.000/s while simultaneously varying the temperature between -100 °C and + 235 °C. X-ray diffraction measurements were performed on the as-delivered and deformed specimens. The mechanical behavior of fully austenitic high manganese TWIP steels is strongly dependent on the stacking fault energy γSFE, which determines the ease of cross slip and the twinning propensity. Five experimental high manganese TWIP steels were produced based on thermodynamic stacking fault energy calculations and tested in a similar manner as the DP and TRIP steels. The microstructure and texture evolution of the TWIP steels during plastic deformation was studied on some of the specimens by means of electron backscatter diffraction (EBSD) and transmission electron microscopy (TEM).
The low and intermediate strain rate tests (0.001…1/s) were carried out with a conventional commercial Instron 8800 servohydraulic materials testing machine, while the Hopkinson split bar technique was utilized for the high strain rate tests (~500…1250/s). Various techniques were used to vary the test temperature. To guarantee the best possible reliability of the test results, extensive studies on the tensile Hopkison pressure bar technique, in particular the specimen geometry, were included in the present study.
The strain hardening behavior of the TRIP steel showed strong dependence on both temperature and strain rate, to which the DP steel seemed to be less sensitive. The mechanical behavior of the TWIP steels varied strongly with temperature and applied strain rate. In many cases the results revealed a good correlation with the calculated values of the stacking fault energy. Reduced elongations at low temperatures exhibited by TWIP steels with higher SFE’s could be attributed mostly to the underdeveloped microstructure and crystal orientations, and not as usually proposed in the literature, to extensive twinning at low strain levels. The measuring techniques, detailed SFE calculations, and the results of the mechanical tests and microstructure characterization are presented and discussed in details in this thesis.