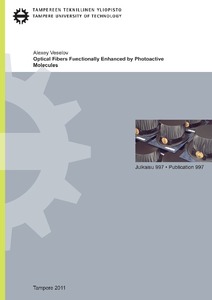 The experimental platform to study optical fibers (OFs) functionally enhanced by layers of photoactive molecules was developed. The used multimode step-index OFs were preliminary mechanically or chemically modified. Photonic crystal fibers (PCFs) were used as supplied. The photoactive layers were deposited using Langmuir-Blodgett and self-assembling monolayer (SAM) techniques. Two types of compounds were used for the fiber functionalization, porphyrin derivatives and Citrine (modified yellow fluorescent protein). This work is the first demonstration of SAM deposition of porphyrin derivatives on conventional OFs and inside the channels of PCFs, as well as Citrine SAM deposition on OFs. The developed experimental optical setup together with installed modified OFs rendered possible: i) to deliver the excitation light to the photoactive molecules, and ii) to collect the fluorescence and deliver it to the measuring system. Moreover, the same experimental system was used to optimize SAM process. It can also be used for real-time monitoring of SAM deposition of any type of photoactive molecules.
The light guided by conventional multimode step-index fibers can only interact with molecules on its surface if the cladding layer is essentially thinned or removed completely. This can be done either by tapering or chemical etching of an OF. The optimum geometries for the tapered regions were determined by two methods based on fluorescence intensity measurements of the molecular films. The optimum tip diameter of a tapered OF was found to be 35-48 µm for the fibers with 105 µm core and 125 µm cladding diameters. For the etched OFs the reasonable tip diameter was 70 µm for the same fiber, and sufficient tip length was 2.5 mm.
The modified OFs were tested in sensor applications for detecting pH, Ca2+, and volatile organic compounds (diethylamine was used in this study). A reasonable reproducibility of pH measurements was demonstrated for OF sensor with free-base porphyrin probe in the pH range of 0.6-3.8 and for Citrine probe in the pH range of 6.5-9. The sensitivity of Ca2+ ion sensor with Citrine SAM was on the level of a few tens of µM and diethylamine was detected at a few mM concentration using Zn-porphyrin OF sensor.
The strongest fluorescence response of functionalized OFs in typical sensor application configuration was obtained for hollow core PCFs. The photoactive SAMs were deposited inside the light guiding channels, thus providing the most efficient excitation and fluorescence collection among the studied fibers. These OFs can be used in applications that require high sensitivity and the smallest amount of analyte. Alternatively, chemically etched conventional OFs are relatively easy to produce and functionalize. They provide reasonably high efficiency of SAM excitation and fluorescence collection and can be successfully used in less demanding optical sensor applications.