Novel Aspects of Second-harmonic Generation from Thin Films and Surfaces 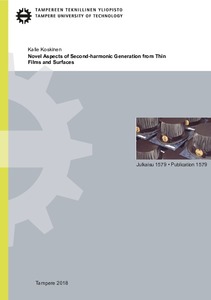 Second-harmonic generation is a second-order nonlinear optical process that can be utilized in a variety of applications. The main limitation of second-harmonic generation is that it is forbidden for centrosymmetric materials. Enabled by the advances in nanofabrication, considerable amount of attention has been given to the miniaturization of optical components for integrated photonics. As a result, the expansion of the range of second-order materials is more desirable than ever.

In this work, we developed a sophisticated analytical model to characterize the second-harmonic response of thin films using various traditional experimental methods. A thin material system brings forth additional complexity due to the presence of reflections that have significant consequences to the nonlinear characterization process both qualitatively and quantitatively. Using the developed model, we studied second-harmonic generation from various material candidates in order to determine whether they have potential as novel nonlinear materials. These materials are composites consisting of multiple alternating dielectric layers, silicon nitride, indium selenide, and gold nanoparticle films coated with titanium dioxide.

The results of this work indicate, that 1) multilayered composites are in fact a promising solution to circumvent the requirement for non-centrosymmetry of secondharmonic generation, 2) indium selenide was found to possess a significant secondharmonic response and to show potential for nonlinear applications, 3) the already strong second-harmonic generation from silicon nitride was enhanced six-fold by material composition, and 4) the second-harmonic response from gold nanoisland films was enhanced 40-fold by a novel non-resonant local-field enhancement process, controlled by tuning the thickness of dielectric coating covering the nanoislands. Lastly, the utility of the developed model was demonstrated by showing that using a traditional simpler model that neglects reflections results in both qualitatively and quantitatively erroneous results in the recognition of multipolar contributions to second-harmonic generation from thin films. In addition, the general nature of the model was highlighted by the fact that the same model was used successfully to analyse the various different experimental configurations used in this work.