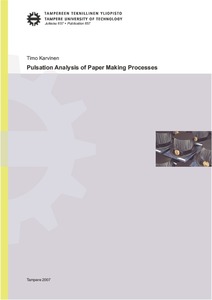 Pulsation phenomena in two processes of a papermaking machine were studied. The processes are that taking place in the approach flow system and the headbox and the coating process. Pressure and velocity pulsation is created by pumps and screens in the approach flow system in the frequency range 5-100 Hz, which creates harmonic basis weight variation in paper in the machine-direction. Basis weight variation is a quality defect in paper and this variation in paper properties also affects the runnability of the paper machine. In the coating process a screw pump creates pulsation which can be seen as harmonic basis weight variation in coating in the machine-direction.Pulsation was modeled in the approach flow system and the headbox using the equations of fluid transients, which are the same as the equations of acoustics when friction can be neglected, which is the case in the approach piping. One- and three-dimensional solutions were compared assuming the structure around the fluid perfectly rigid. In the three-dimensional solution, which was obtained using a commercial FEM code, the fluid-structure interaction (FSI) was taken into account. In the coating process, in which it is extremely important to include friction, pulsation was modeled using the equations of fluid transients, the equations of pulsatile flow, and using a CFD code that solves the Navier-Stokes equations. Tapered slice channels of the headbox were analyzed in detail. It was found that the shape of the channel can affect the velocity oscillation amplitude and thus machine-direction basis weight variation at the channel outlet significantly. Changing the traditional linear shape to parabolic could decrease basis weight variation almost by one third for the same excitation amplitude.The fluid-structure interaction must be taken into account to correctly model pulsation in the approach piping and the headbox. The rigid and FSI solutions can yield large differences in the results. Laboratory measurements using particle image velocimetry confirm that FSI needs to be included in the analysis. Modeling of the approach piping and the headbox reveals that with FSI included in the analysis, many experimental findings of basis weight variation of paper can be explained. The relationship between pressure pulsation in the piping system and the machine-direction basis weight variation in paper was shown computationally. No simple relationship was found.In the paper coating process, modeling friction is extremely important. In the case of Newtonian fluid the approaches of harmonic fluid transients, the method of characteristics, and the analytical solution of pulsatile flow yield similar results because of the long time scale of the problem. In the case of non-Newtonian fluid, which is encountered in the paper coating, the solution is obtained by solving the Navier-Stokes equations with a CFD code. Also, the approach of harmonic fluid transients gives similar results for velocity pulsation. The relationship between pressure and velocity pulsation and basis weight variation was shown.