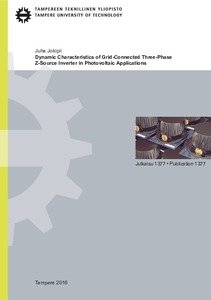 Due to the inevitable depletion of fossil fuels and increased awareness of their harmful environmental effects, the world energy sector has been moving towards extensive use of renewable energy resources, such as solar energy. In solar photovoltaic power generation, the needed interface between the source of electrical energy, i.e., a photovoltaic generator, and electrical energy transmission and distribution systems is provided by power electronic converters known as inverters. One of the latest addition into the large group of inverter topologies is a Z-source inverter (ZSI), whose suitability for different applications have been extensively studied since its introduction in 2002. This thesis addresses the dynamic characteristics of a three-phase grid-connected Z-source inverter when applied to interfacing of photovoltaic generators. Photovoltaic generators have been shown to affect the behavior of the interfacing power converters but these issues have not been studied in detail thus far in case of ZSI.

In this thesis, a consistent method for modeling a three-phase grid-connected photovoltaic ZSI was developed by deriving an accurate small-signal model, which was veriﬁed by simulations and experimental measurements by means of a small-scale laboratory prototype inverter. According to the results presented in this thesis, the small-signal characteristics of a photovoltaic generator-fed and a conventional voltage-fed ZSI differs from each other.

The derived small-signal model was used to develop deterministic procedure to design the control system of the inverter. It is concluded that a feedback loop that adjusts the shootthrough duty cycle should be used to regulate the input voltage of the inverter. Under input voltage control, there is no tradeoff in between the parameters of the impedance network and impedance network capacitor voltage control bandwidth. Also the small mismatch in the impedance network parameters do not compromise the performance of the inverter. These phenomena will remain hidden if the effect of the photovoltaic generator is not taken into account. In addition, the dynamic properties of the ZSI-based PV inverter was compared to single and two-stage VSI-based inverters. It is shown that the output impedance of ZSI-based inverter is similar to VSI-based inverter if the input voltage control is designed according to method presented in the thesis. In addition, it is shown that the settling time of the system, which determines the maximum power point tracking performance, is similar to two-stage VSI-based inverter.

The control of the ZSI-based PV inverter is more complicated than the control of the VSIbased inverter. However, with the model presented in this thesis, it is possible to guarantee that the performance of the inverter resembles the behavior of the two-stage VSI, i.e. the use of ZSI in interfacing of photovoltaic generators is not limited by its dynamic properties