Confinement in the diode laser ignition of energetic materials 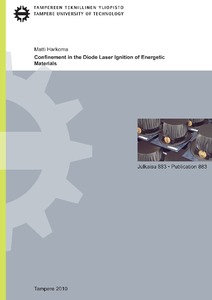 For nitrogen the ignition energies are slightly higher compared with air (and also with argon) in the same pressure. This is analogous compared with the CO2 laser ignition results at lower pressures by other authors, but at higher pressures of air iv and nitrogen the experimental results of this work and of the reference are in reverse order.

According to this work, the degree of confinement has a strong role in the deflagration to detonation transition ignition mechanism. Using a degree of confinement that is heavy enough, a closed and tight mechanical structure, a high enough pressure inside the device, and good absorbance, for example using carbon black in the energetic material, the ignition energy would be low enough for economically viable applications of compact diode laser igniters.