Single- and Dual-Frequency Laser Diodes based on Surface Gratings 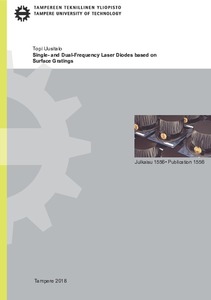 The thesis covers the development of single and dual longitudinal mode distributed feedback (DFB) lasers with surface gratings. These gratings were studied since they enable regrowth-free fabrication and easy implementation of arbitrary longitudinal eﬀective refractive index variations. Advanced transverse and longitudinal surface grating structures were modeled, simulated, and experimentally tested. Procedures for optimizing the laser structures across a wide range of parameter variations were developed. The main targets were narrow linewidth emission for optical pumping of Rubidium atomic clocks, increased direct amplitude modulation for optical communications, and photonic generation of widely tunable electrical signals in the millimeter wave band for the next generation of wireless communications.

The dual longitudinal mode emission was achieved by periodically placing phase shifts along the grating. The experiments showed that the direct amplitude modulation bandwidth is extended when the photon-photon resonance associated with dual-mode emission is properly placed with respect to the carrier-photon resonance and when both resonances are adequately damped. Diﬀerence frequency range controlled by structural variations and 40 GHz diﬀerence frequency tuning by bias were demonstrated, as well as high speed diﬀerence frequency modulation. Linearly apodized LC-RWG surface gratings enabled a lower threshold current, a higher output power, and a broader range of diﬀerence frequency tunability by bias. Also the apodization and the complex-coupling of the surface gratings enabled the use of higher facet reﬂectivities, leading to narrower intrinsic short timescale linewidths. The achieved performance improvements indicate that the studied laser types are promising solutions for their target applications.