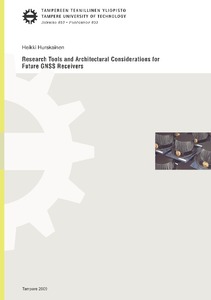 Satellite navigation has emerged to be one of our every-day technologies, like wireless communication. The U.S. based Global Positioning System, better known as GPS, was the first system to serve civilian users. Today, GPS is under modernization, Europe has devoted a lot of effort to build their own system, called Galileo, and activities around Russian GLONASS system are also being re-initiated.
The users benefit of having multiple systems with more satellites available. This can be made possible by the receiver, which should be able to process the new modulations and frequencies introduced in modern navigation signals. This thesis is about receivers for future Global Navigation Satellite System (GNSS). Especially the focus is on baseband issues of a combined GPS and Galileo receiver, with exploiting their similar Code Division Multiple Access (CDMA) signal structure and shared frequency bands.
The work presented in this thesis deals with the tools for research and development of such a receivers, and outlines the potential future receiver architectures. For the research community the biggest advantage in receiver simulators would be having a standardized research environment, enabling the fair comparison of the results from different studies, e.g. in the area of multipath mitigation.
The Software Defined Radio (SDR) has been discussed in context on GNSS receivers before, in this thesis an overview of the current situation is given with discussion on hardware and software trade-offs. Hardware engines are still dominating in commercial receivers, but more flexible SDR architectures are emerging in research tools. Last, a novel approach of using a multicore processing platform architecture for GNSS receiver implementation is presented. This approach is seen to have a great potential in future receivers, especially since it could also be used to realize other technologies, like wireless communication, in the same device.