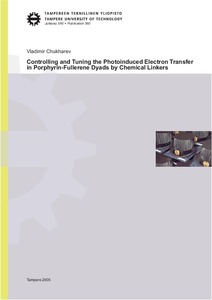 A series of porphyrin fullerene dyads covalently connected to each other with two linkers forming a highly symmetric compound with π-stack sandwich-like structure was systematically studied in solutions and in solid self-assembled monolayers by a variety of steady-state and time-resolved methods. The interchromophore interactions of such compounds can be fine-tuned by varying the linker lengths. The emission spectra of the dyads have a character typical for a preformed intramolecular exciplex, and an additional absorption feature with a partial charge transfer (CT) character is detectable in the near-infrared region.


The analysis of the CT absorption and the exciplex emission bands within the framework of the Marcus theory of the electron transfer allows estimation of all the internal parameters used in the theory. The methods of the analysis have been developed and tested with a simpler rod-like olygoaromatic molecule. A set of the obtained internal parameters was in good agreement with the electrochemical measurements.


Variation in the linker lengths of the porphyrin fullerene dyads has shown that the strongest electronic coupling was observed for the dioxyethyl type of linkers, whereas for the shorter and the longer bridged dyads the couplings were weaker. The study of the solvent effect allowed the estimation of the degree of the charge transfer for the exciplex and the difference of the static dipole moments in the exciplex and the ground states.


The comparison of the steady-state and the time-resolved results confirmed a hypothesis that the exciplex relaxes to the ground state via the complete charge separated state which cannot be detected in nonpolar solvents due to its faster decay than formation. The hypothesis unifies the photoreaction scheme for polar and nonpolar solvents implying that the vast majority of excited molecules undergoes the complete charge separation.


The possibility to build self-assembled monolayers (SAM) with the predefined orientation of the dyads on ITO electrode has been demonstrated. In the Maxwell displacement charge experiments, the photoexcitation results in the electron transfer from SAM to ITO independent of the dyad orientation. The ITO fullerene porphyrin structure shows a ca. 25 times stronger electrical signal than the ITO porphyrin fullerene structure. The interaction of the dyad and the electrolyte was found to be the factor limiting the photocurrent in the photoelectrochemical cell.