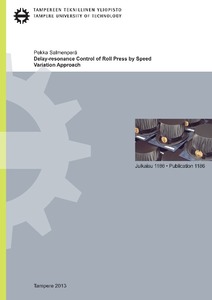 Roll pairs in rolling contact are commonly used in paper machines. To improve the process at least one of the component rolls is covered by a soft layer, which is the case in calenders and coating units. The larger contact area allows longer manipulation time in the nip, and therefore faster line speeds can be achieved when using such soft covered rolls compared to hard non-covered rolls. This improvement was widely utilised in start-ups of fast next generation machines late 90’s. Several examples, however, proved that the new polymers in the cover materials were a source of new-type of oscillations arising at higher running speeds making it difficult to reach the planned production rates. As understood quite early, the reason for these instabilities is the exponential and thus too slow recover of the cover penetration during each roll revolution leading to self-regenerative normal oscillations of the roll pair. Further investigations indicated that: 1) these instabilities exist at certain discrete running speeds beyond a critical speed level, 2) the vibration frequency was always the natural frequency of the roll stack and 3) the highest amplitude peaks correspond to rotation frequencies, which are integer fractions of the natural frequency. These rotational frequencies are called delay-resonance speeds referring to the feedback mechanism of the one revolution earlier cover penetration.

Dynamical instability of rolls is not accepted as it marks the roll covers by wave formations, which in turn cause variations in the line load, and deteriorates the quality of the product. Vibration also overloads mechanical structures by means of fatigue and can cause damage of vibration sensitive components.

This thesis is introducing methodology and tools to control the self-excited delay-resonance vibrations at speeds, which are higher than the critical speed level making it possible to extend the production speed range. The methodology is based on systematic variation of the running speed by three different ways: 1) by setting the speed to fixed value between two successive resonance speeds, 2) by active change of the speed for avoiding the regular formation of waves on the cover and 3) by controlling phase-shift of rolls to damp cover-induced vibrations. The control methods are verified in a laboratory unit scaled down to half size of the existing industrial units.