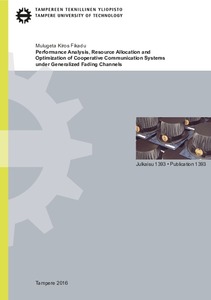 The increasing demands for high-speed data transmission, efficient wireless access, high quality of service (QoS) and reliable network coverage with reduced power consumption impose demanding intensive research efforts on the design of novel wireless communication system architectures. A notable development in the area of communication theory is the introduction of cooperative communication systems. These technologies become promising solution for the next-generation wireless transmission systems due to their applicability in size, power, hardware and price constrained devices, such as cellular mobile devices, wireless sensors, ad-hoc networks and military communications, being able to provide, e.g., diversity gain against fading channels without the need for installing multiple antennas in a single terminal. The performance of the cooperative systems can in general be signiﬁcantly increased by allocating the limited power efficiently. In this thesis, we address in detail the performance analysis, resource allocation and optimization of such cooperative communication systems under generalized fading channels. We focus ﬁrst on energy-efficiency (EE) optimization and optimal power allocation (OPA) of regenerative cooperative network with spatial correlation effects under given power constraint and QoS requirement. The thesis also investigates the end-to-end performance and power allocation of a regenerative multi-relay cooperative network over non-homogeneous scattering environment, which is realistic case in practical wireless communication scenarios. Furthermore, the study investigates the end-to-end performance, OPA and energy optimization analysis under total power constraint and performance requirement of full-duplex (FD) relaying transmission scheme over asymmetric generalized fading models with relay self-interference (SI) effects.

Furthermore, the second part of the study investigates the end-to-end performance and power allocation of MRC based regenerative multi-relay cooperative system over non-homogeneous scattering environment. Novel exact and asymptotic expressions are derived for the end-to-end average SER for M -QAM and M -PSK modulations.The offered results are employed in performance investigations and power allocation formulations under total transmit power constraints.

The obtained results indicate that depending on the severity of multipath fading, the spatial correlation between the direct and relayed paths and the relay location, the direct transmission is more energy-efficient only for rather short transmission distances and until a certain threshold. Beyond this, the system beneﬁts substantially from the cooperative transmission approach where the cooperation gain increases as the transmission distance increases. Furthermore, the investigations on the power allocation for the multi-relay system over the generalized small-scale fading model show that substantial performance gain can be achieved by the proposed power allocation scheme over the conventional equal power allocation (EPA) scheme when the source-relay and relay-destination paths are highly unbalanced. Extensive studies on the FD relay system also show that OPA provides signiﬁcant performance gain over the EPA scheme when the relay SI level is relatively strong. In addition, it is shown that the FD relaying scheme is more energy-efficient than the reference HD relaying scheme at long transmission distances and for moderate relay SI levels.

In general, the investigations in this thesis provide tools, results and useful insights for implementing space-efficient, low-cost and energy-efficient cooperative networks, speciﬁcally, towards the future green communication era where the optimization of the scarce resources is critical.