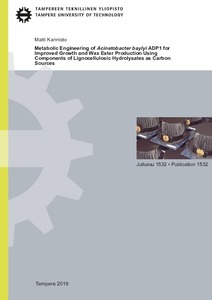 Microorganisms can be used in bioprocesses to produce various chemicals, such as fuels, cosmetics and medical products, as an environmentally friendly alternative for chemical synthesis. In these bioprocesses the raw materials (e.g. lignocellulose) can be converted to compounds with high complexity with a minimum energy input and waste material production. The metabolic capabilities and robustness of the bioprocess host organism limit the yield and purity of the product. Molecules that currently cannot be produced efficiently with robust microbial host organisms include wax esters, which have several industrial applications and are currently produced with the Jojoba plant.

Acinetobacter baylyi ADP1 is a non-pathogenic soil bacterium that produces wax esters that can readily incorporate foreign DNA into their genome and utilize various plant-derived molecules as a carbon source. For these reasons, A. baylyi ADP1 has become a model organism of bacterial genetics and metabolism, which has led to the accumulation of a vast amount of information about its biology. This Doctor of Science thesis describes experiments where the metabolism of A. baylyi ADP1 was engineered for improved growth and wax ester production using lignocellulose-derived molecules as raw material.

With a gene knockout (rmlA) and expression of a foreign gene (pykF), it was possible to double the growth rate of A. baylyi APD1 on glucose, double the molar wax ester yield from glucose while improving product purity and collection of the cells. An additional gene knockout (poxB) improved growth and wax ester production in the presence of acetate, a common growth inhibitor found in lignocellulosic hydrolysates. A combination of these modifications led to a strain that produced 0.45 g/l of wax esters in a medium containing glucose, amino acids from casein hydrolysate and acetate as carbon sources. In addition, a biodetoxification strain for the removal of inhibitors produced in the pretreatment of lignocellulosic biomass was produced with a single gene knockout.