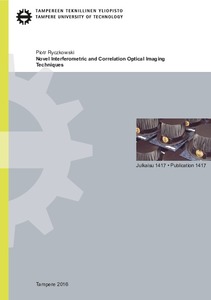 The ability to image objects with high precision is central to our every-day life and to the progress in understanding of fundamental phenomena. It is thus natural that a wide range of imaging techniques have been the subject of intense research and developments in the past decades. Whilst imaging is generally thought from the spatial domain perspective, imaging or detecting ultra fast time-varying signals is also of prime importance. This work reports on novel, proof-of-concept, optical imaging techniques both in the spatial and time domains. All the proposed techniques are experimentally validated and their current limitations discussed. It is expected that the work presented in this thesis will open up new perspectives and opportunities for high precision imaging of objects as well as the detection of ultrafast waveforms.
High in-depth precision optical imaging in the spatial domain relies on indirect phase measurements. Measurements are typically performed using interferometric techniques where the phase of a light wave that has interacted with the object to be imaged is compared with a reference wave. Interferometric detection can be carried out either in the time domain where the reference wave is delayed in time between subsequent data acquisition points, or in the frequency domain where the relative phase of different frequency components is recorded. Both techniques have advantages but they are intrinsically limited by several factors, such as dispersion which limits the overall resolution or long acquisition times which prevent imaging of fast moving objects.
Stroboscopic white-light interferometry is a technique that enables precise three-dimensional (3D) measurements of rapidly oscillating objects. The recent development of high speed micromechanical machines calls for the need of precise and fast measurement techniques enabling performance and quality control. In this work, we report on a new supercontinuum light source with tunable repetition rate enabling stroboscopic measurements with nanometer accuracy of objects oscillating at speeds in excess of MHz frequencies.
Optical coherence tomography is another powerful 3D imaging technique widely employed for biological imaging. The axial resolution of conventional optical coherence tomography is limited by the spectral bandwidth of the light source and the dispersion of optical components and/or of the sample under test. In this work we demonstrate the novel concept of intensity-based optical coherence tomography using a classical broadband light source and a Mach-Zehnder interferometer. The technique exhibits built-in even-order dispersion cancellation and a point spread function with reduced full-width at half maximum compared to standard optical coherence tomography.
Ghost imaging uses the correlation between spatially incoherent light scattered by an object and the spatially-resolved intensity pattern of the incident light to construct a ghost image of the original object. The unique aspect of ghost imaging is that an accurate image of the object can be obtained from the correlation, despite the fact that neither of the single measurements carry any meaningful information about the object. The concept of ghost imaging has been truly influential in the past few years.
Originally developed to test the Einstein-Podolsky-Rosen paradox using entangled photon sources, the concept has been expanded to classical light sources and impacted on many fields and applications such as, microscopy, compressive sensing, and imaging in the presence of turbulence or high loss. We transpose the concept of ghost imaging into the time domain to produce the image of an ultrafast signal by correlating in time the intensity of two light beams, neither of which independently carried information about the signal. We further demonstrate a method based on the dispersive Fourier transform of an incoherent supercontinuum to generate a magnifield ghost image of an ultrafast waveform, allowing to improve significantly the temporal resolution of imaging in the time-domain.