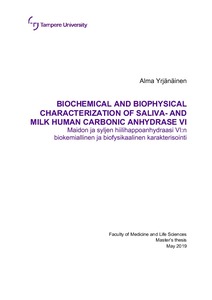 Background and aims of study: Carbonic anhydrase VI, CA VI, belongs to carbonic anhydrase isoenzymes that is known to secrete from serous acinar cells in the salivary glands and mammary gland to saliva and milk, respectively. The molecular weight of CA VI has been assessed with SDS-PAGE-electrophoresis as well as with Western blotting, yet not with liquid chromatography and light scattering. Also, the differences in the amino acid chains of milk and salivary CA VI are not thoroughly assessed. The aim of this study was to determine the molecular weight and particle size of milk and salivary CA VI in the physiological buffer. In addition, potential glycosylation differences and the melting temperature of CA VI were desired to study.

Methods: The molecular weight and particle size of CA VI isoenzymes were analyzed with SDS-PAGE, size-exclusion chromatography and light scattering, both static and dynamic, respectively. The melting temperature for salivary CA VI was determined with differential scanning calorimetry. The mass spectrometric analyses were not completed due to the malfunction of the apparatus.

Conclusions: It can be concluded that both milk and salivary CA VI exist as oligomeric proteins in the physiological buffer. The pentameric state is probably the most prevalent form of assembly, which has not been reported earlier for any human CA isoenzyme. The existence of such a unique form opens new avenues for elucidating the prevalence and functional role of oligomerization in CA VI.