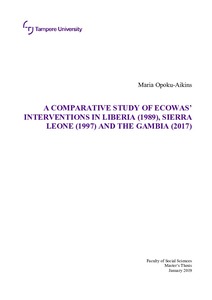 Since the post-cold war era, West Africa has been experiencing violent intrastate conflicts which have escalated to extreme levels and lasted over decades at a time, which led to serious security threats in the region. ECOWAS, created initially with an objective of promoting economic integration and development in West Africa, amended its mandate to include conflict management. Since its establishment, ECOWAS has engaged in several interventions in its member states, of which Liberia, Sierra Leone and The Gambia are part and were researched in this study.

The purpose of this study was to evaluate ECOWAS and its regional conflict prevention strategies, as well as make inquiries into ECOWAS’ policies for reducing security threats in the region.

The findings of the study showed that the conflicts in Liberia and Sierra Leone, which occurred in the early 1990s, had similar causes, such as subdivisions among ethnicities, extreme political marginalization, poor democratic management and economic hardship. In both cases, the UN had to intervene before the conflicts could be resolved. Unlike the first two conflicts, the Gambian conflict occurred due to years of authoritative governance and major electoral misconduct in 2016.

During the first two interventions, ECOWAS was presented with major challenges but through Protocol’s Relating to the Mechanism for Conflict Prevention, Management, Resolution, Peace-Keeping and Security, ECOWAS managed to address some issues. The findings of the study also revealed that during the intervention in The Gambia, ECOWAS portrayed a high level of conflict prevention skills, showing that it had addressed the challenges faced in the past and was ready to conduct mediations and interventions without the aid of the UN. ECOWAS continues to implore new methods of conflict prevention, monitoring and resolution to promote regional development, democracy and good governance.