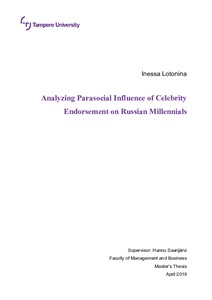 Social media plays an important part in modern society. Marketing professionals started to pay attention to social media in search for new ways to promote products and services online. One of the most recognized ways to promote the product is with the use of celebrity endorsement. Marketing scholars pinpointed that using celebrity endorsement for reaching Millennial consumers is very effective. During the process of endorsement, a publicly recognized person promotes the product by appearing with it in an advertisement. Celebrities appeared in product promotion ever since television set has become a necessary household item. Television viewers were highly interested in celebrities and researchers attempted to explain why the viewers are so captivated by them. In 1956, Horton and Wohl invented parasocial interactions theory to explain the phenomenon of fascination with celebrities. Horton and Wohl were the first to suggest that celebrities are effective in product promotion due to viewers’ aspiration to be more similar to them.

Semi-structured interviews were used in this research, with overall twelve participants from Russia. All participants were female Millennials aged 25-28. Seven reoccurring themes were identified from the interview data, showcasing how parasocial interactions influenced consumer behavior of social media followers. These themes include pursuing celebrity experience, establishing high level of trust with celebrity, pursuing self-transformation through meaning-based consumption, adopting celebrity’s lifestyle and habits, fulfilling the need to belong, stepping outside the consumption comfort zone and actively pursuing higher level of attractiveness. This research contributes to both parasocial interactions and celebrity endorsement literature by providing consumers’ perspective on persuasiveness of social media endorsements. It was revealed that followers see celebrities that they emotionally engage with as trustworthy individuals and are willing to purchase their products without hesitation. As followers are open to try new products, it creates wide possibilities for marketers to utilize celebrity endorsement to its full potential. The biggest opportunity can be identified in endorsement of beauty and fashion products, since followers revealed great interest in enhancing their physical appearance. However, followers’ trust must be maintained by celebrities choosing endorsements wisely and not engaging with promotion of non-related products.