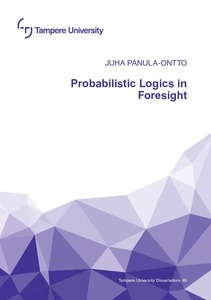 A prudent decision-maker facing a complicated strategic decision considers the factors relevant to the decision, gathers information about the identified factors, and attempts to formulate the best course of action based on the available information. Careful consideration of any alternative course of action might reveal that in addition to the desirable intended consequences, a number of less desirable outcomes are likely to follow as well. Facing a complicatedly entangled net of considerations, entwined positive and negative outcomes, and uncertainty, the decision-maker will attempt to organize the available information and make the decision by using some strategy of reasoning on the information.

Probabilistic language gives room for haziness in knowledge description, and is thus suitable for describing knowledge originating from humans, conveyed to the decision-maker in a non-formal format, such as viewpoints and opinions. Many domains of decision-making and planning use human sourced knowledge, especially if the informants are knowledgeable people or experts with relevant, developed understanding on the domain issues. The expert views can augment the knowledge bases in cases where other forms of information, such as empirical or statistical data, are lacking or completely absent, or do not capture or represent considerations important for the decision-making. This is a typical setting for strategic decision-making, long range planning, and foresight, which have to account for developments and phenomena that do not yet exist in the form they might in the future, or at all.

This work discusses approaches for decision support and foresight oriented modeling of expert knowledge bases and inference based on such knowledge bases. Two novel approaches developed by the author are presented and positioned against previous work on cross-impact analysis, structural and morphological analysis, and Bayesian networks. The proposed approaches are called EXIT and AXIOM. EXIT is a conceptually simple approach for structural analysis, based on a previously unutilized computational process for discovery of higher-order influences in a structural model. The analytical output is, in relation to comparable approaches, easier to interpret considering the causal information content of the structural model. AXIOM is a versatile probabilistic logic, combining ideas of structural analysis, morphological analysis, cross-impact analysis and Bayesian belief networks. It provides outputs comparable to Bayesian networks, but has higher fitness for full model parameterization through expert elicitation. A guiding idea of the methodological development work has been that the slightly aged toolset of cross-impact analysis can be updated, improved and extended, and brought to be more interoperable with the Bayesian approach.