When one size does not fit all : failed ideals of liberal peacebuilding, socio-economic downward spiral and the Bosnian Spring protests of 2014 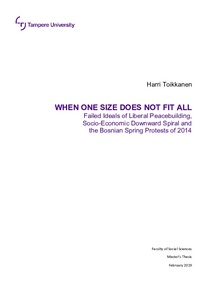 In early 2014, Bosnia and Herzegovina experienced the worst civil unrest it had seen since the 1992 - 1995 war as a wave of protest, called by media commentators ‘the Bosnian Spring’, shook the fragile country. The initially fierce and violent protests soon took a more institutionalized form as the protesters began forming plena, or citizens’ assemblies, and articulating their demands through the means of direct democracy. This research seeks to give a comprehensive understanding of how the country had come to such state that its people were willing to raise up on the barricades that year. This is done by utilizing the perspective of criticism of liberal peacebuilding – a top-down led peacebuilding strategy applied in BiH. The failures of liberal peacebuilding are juxtaposed with a thorough analysis of the protest movement: who did they seek to represent, what was the object of their resistance and how did they undertake their resistance? To answer these questions, a Critical Discourse Analysis (CDA) of documentation produced by the protesters, such as lists of demands, declarations, statements and meeting reports, is carried out.

The findings of the research point out that the Bosnian Spring protest movement can be described as partly a workers’ movement, building on the socialist-era tradition, and partly a populist or civic movement, claiming legitimacy also beyond the working class. The asymmetric power relations between the protesters and the political establishment served as a key factor for defining the collective identity of the movement. Attempting to escape domination by political parties, elites and governments, the movement constructed its proclaimed apolitical identity based on the people-versus-elite dichotomy. Manipulation by the establishment, years of experienced neglect and wrongdoings and common calls for solidarity between the plena served to strengthen the collective identity. The movement focused its resistance particularly on political parties, elites and governments, administrative and political inertia and neoliberalism. Calling for social justice, the movement’s most common demands included taking away unjustified financial benefits from political party and government representatives and redistributing them to the society, replacing current governments with politically unaffiliated expert governments, reversing the failed post-war privatization processes and ending the impunity of repressive state-authorities and those benefiting illegally from the privatizations.

The research pieces together a portrait of the peace process in Bosnia and Herzegovina, which has been characterized by stagnation, grey economy, corruption, clientelism, economic exploitation, a pronounced role of predatory elites and a dependency on a long-living international presence. While the poorly performing ethno-nationalist parties have dominated the legislatures, their success in repeatedly winning their seats has been contrasted by an overwhelming distrust towards them, prevalent among average Bosnians. At the same time, the importance of basic socio-economic issues for the everyday lives of Bosnians has been overlooked parallel to a disproportionate emphasis of inter-ethnic distrust. The Bosnian Spring protests fit this narrative expectedly, as the protesters’ criticism of the status quo of ethno-nationalist parties and elites sent out a message that hunger weights more than political fault lines. The links between the failures of liberal peacebuilding and the witnessed resistance are deemed evident as at the root of the protesters’ criticism were the same issues that liberal peacebuilding seeks to achieve: democracy, rule of law, civil society, human rights and economic liberalization. It is argued that the space for civil society actors to influence societal developments in Bosnia and Herzegovina and to act to bring upon positive change is highly restricted due to the domination and manipulation by the political elites.