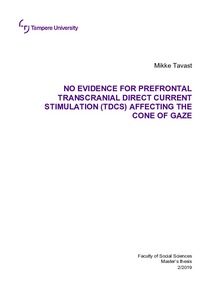 Psykologian tutkinto-ohjelma - Degree Programme in Psychology
Yhteiskuntatieteiden tiedekunta - Faculty of Social Sciences
This publication is copyrighted. You may download, display and print it for Your own personal use. Commercial use is prohibited.

Relative activity between the left and the right prefrontal cortex has been associated with approach and avoidance motivation. In previous studies, perceiving a direct gaze has been shown to induce approach-related relative left frontal activity, and perceiving an averted gaze has been shown to induce avoidance-related relative right frontal activity. The current study aimed to manipulate approach-avoidance related frontal cortical activity with transcranial direct current stimulation (tDCS) to investigate if the prefrontal areas associated with motivational direction are causally involved in whether we interpret another person to be looking at us. To this end, cone of gaze was measured (i.e. the range of gaze angles participants interpreted to be looking at them) while the participants were being stimulated with tDCS.

tDCS was applied to dorsolateral prefrontal cortex with the aim to increase either relative left-sided or right-sided frontal cortical activity. The study was sham-controlled and double-blind. Within-subjects design was used. The results provided no evidence for tDCS affecting the width of the gaze cone. The problems associated with the interpretation of null-results in tDCS studies are discussed. It is concluded, that the current study is inconclusive and that further study is needed.