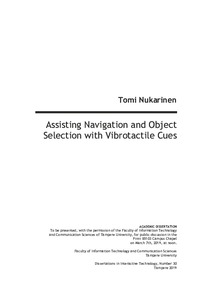 Our lives have been drastically altered by information technology in the last
decades, leading to evolutionary mismatches between human traits and the
modern environment. One particular mismatch occurs when visually
demanding information technology overloads the perceptual, cognitive or
motor capabilities of the human nervous system. This information overload
could be partly alleviated by complementing visual interaction with haptics.

The primary aim of this thesis was to investigate how to assist movement
control with vibrotactile cues. Vibrotactile cues refer to technologymediated
vibrotactile signals that notify users of perceptual events, propose
users to make decisions, and give users feedback from actions. To explore
vibrotactile cues, we carried out five experiments in two contexts of
movement control: navigation and object selection. The goal was to find
ways to reduce information load in these tasks, thus helping users to
accomplish the tasks more effectively. We employed measurements such as
reaction times, error rates, and task completion times. We also used
subjective rating scales, short interviews, and free-form participant
comments to assess the vibrotactile assisted interactive systems.

The findings of this thesis can be summarized as follows. First, if the context
of movement control allows the use of both feedback and feedforward cues,
feedback cues are a reasonable first option. Second, when using vibrotactile
feedforward cues, using low-level abstractions and supporting the
interaction with other modalities can keep the information load as low as
possible. Third, the temple area is a feasible actuation location for
vibrotactile cues in movement control, including navigation cues and object
selection cues with head turns. However, the usability of the area depends
on contextual factors such as spatial congruency, the actuation device, and
the pace of the interaction task.