Design and evaluation of guiding methods for 360° videos 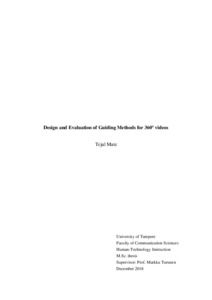 360° video is an emerging trend which is gaining popularity due to immersive nature. These videos can be watched on conventional displays as well as the Head Mounted displays (HMD). In contrast to the traditional 2D videos, in which entire video is displayed within the user’s field of view, 360° videos always have content that is outside the user’s field of view. Viewing 360° content on HMD gives the user an immersive feeling, the user feels like being in the recorded situation. This is a key feature of 360° videos. The content outside the current field of view can be viewed on HMD by turning head or body. However, there is always a possibility of getting disoriented as the content is present all around. Disorientation disrupts the user’s immersion and some interesting event or object can be missed. This problem can be solved by giving guidance to the user to navigate in a 360° video.

Several studies have proposed solutions to the problem of missing the interesting content and getting disoriented. This thesis proposes a novel solution using a research through design approach to design a set of guiding methods. These guiding methods use visual and audio cues such as an arrow marker, a bull’s eye mark, and speech synthesizer audio to guide the user while navigating in a 360° video. A software prototype has been developed which uses different combinations of the designed guiding methods with different videos from YouTube. A novel concept of using 3D audio cues with treble and bass elements is introduced as audio guidance for navigation in a 360° video.

The software prototype was tested with 22 users with a two-phase approach, where guiding methods were redesigned with changes suggested by users from the first phase and in the second phase the revised version was tested again with users. The thesis presents design recommendations for implementing guidance methods with focus on overall experience, usefulness and distraction. The choice of the guidance method depends on the content of the video. The guidance should be subtle, unobtrusive and non-repetitive. The audio guidance should be distinct from the content audio.