Comparison of endogenous retroviral RNA profiles from blood cells and plasma, between nonagenarians and young controls 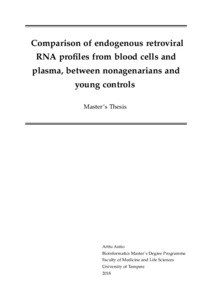 Background: An estimated 8% of the human genome consists of integrated virus genomes that have been left over from past retroviral infections. These human endogenous retroviruses (HERV) have been ravaged by mutational decay, often over millions of years, and most have been rendered inactive. However, some still contain open reading frames and may even code for functional protein products. Upregulation of these retroelements has been observed in certain disease states and in aging mice.

Materials and Methods: PBMC and plasma samples were previously obtained from nonagenarians (n=7, age 90) and young controls (n=7, age 26-32, median age 28). RNA-sequencing of the samples was performed and the expression of endogenous human genes and HERV proviruses of the families HERV-K (HML-2) and HERV-W was quantified. This thesis work focused on the characterization and comparison of proviral expression values between the biological sources and across age groups.