The short-run dynamics and analysis of micro-level productivity growth : evidence from a manufacturing plant in Ukraine 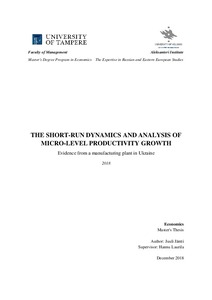 Productivity growth is created amid firms’ production processes and it refers to better and more efficient use of resources, leading to output growth and economic welfare. This study investigates micro-level dynamics of productivity growth in an unconventional market environment. The empirical part of this research utilizes data of the case plant, which operates in Ukraine. The study will apply a widely used approach, the Cobb-Douglas production function, to estimate productivity growth. This estimation is conducted with data of the plant’s production process dating from 2011 to 2018.

This study estimates two productivity models. These models are defined with respect to the Cobb-Douglas production function and they are differentiated by measuring labor input differently. One of the models uses number of workers as a proxy for labor input, while the other applies the hours worked to the function. Both models are estimated as a first-order autoregressive process and the findings from both models are similar. The productivity growth in the case manufacturing plant has been decreasing between 2011 and 2018 and hence, supports the findings in the existing literature. Nevertheless, the overall productivity level during the examination period has contributed positively to the output development, but the most recent data suggests otherwise. Consequently, the quarterly production process at the manufacturing plant is not at a sustainable level because the improved productivity, attributed to the productivity shock of 2011, gradually diminishes. Even though the empirical data set is challenging, the results offer valuable insights to the company’s managers to reevaluate profitability and resource usage.