"It gave me everything but it gave me nothing": a study of second-generation migrants, transnationalism and identity 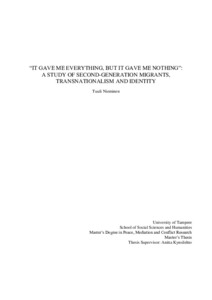 Since the 1990’s Finland has experienced a steady growth in migration. This has led to an increase in interest in the fields of integration and transnationalism. This thesis focuses on the relationship between processes of integration and migrant transnationalism and how they construct the identities of specifically the young adult second-generation migrants. Furthermore, it juxtaposes their experiences with the current objectives of Finnish integration policies to find out how they correlate. Using the Grounded Theory methodology, two semi-structured interviews were conducted with three participants in each with various ethnic backgrounds. Traditionally it has been assumed that integration and transnationalism do not go hand in hand, but recent studies have indicated that they are not necessarily mutually exclusive. Indeed, earlier models of the concepts assumed that integration had an end-goal of total assimilation to the host society, while transnationalism was considered an obstacle. However, this study concludes that second-generation migrants often exist in lived realities of ‘balancing acts’ between the expectations of their parents’ countries and Finland. Through cultural hybridity, it shows how transnationalism manifests in not specifically identifying with ‘here nor there’, and showing a more cosmopolitan attitude, while simultaneously being active agents in society. A quintessential aspect of this is the formation of a ‘third identity’ or a ‘third culture’. As such, this study also offers a view into the evolving meaning of ‘Finnishness’ and Finnish society.