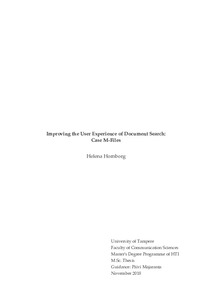 Search is a widely used tool. It is a standard element that can be found on websites, online stores and in most software applications. Search needs to be easily accessible and answer to the users' needs for them to continue using it. This study focuses on document search and how to improve search for M-Files. M-Files is an intelligent information management system that stores data based on its content. The users can access the document based on what it is instead of where it is. This requires an effective search that the users are comfortable using. The purpose of this study is to see if setting UX goals to document search can improve its usability. The study also focuses on how to find the right UX goals and how to use them in the design. In addition, the use of artificial intelligence to enhance user experience was studied.

To be able to find the UX goals the users were consulted about their use of M-Files search. Based on the responses from the user questionnaire, three UX goals were formed: clarity, ease of use and controllability. Two prototypes were created based on the literature survey on designing search and the UX goals. The prototypes were identical, except that search filters were placed in different locations. Prototype A had filters on the right side of the layout, prototype B on the left. The prototypes were tested with eight users where they tested either the A or B prototype. The participants liked the improved design. They felt it was clearer, easier to use and it gave control for the users over the system. The added AI functionality was one element in improving usability. When the two designs were compared, prototype B with filters on the left side was a bit more efficient to use and it received higher scores from the participants.

The results from this study show that setting UX goals to a document search can improve its usability. It also became apparent throughout this study that the research on other forms of search than web is lacking and requires further studies.