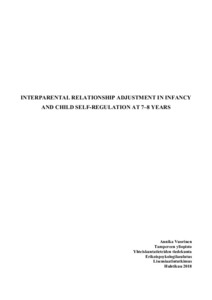 Self-regulation plays an important role in children’s social, emotional and academic adjustment. Yet, relatively little is known about its early family antecedents beyond parenting and parent–child relationships. The aim of this study was to investigate the prospective associations between interparental relationship adjustment in infancy and children’s behavioral and emotional self- regulation at 7–8 years of age. Direct and indirect links between interparental relationship adjustment at 2 months and subsequent child self-regulation were examined, with the affective quality of the mother–child and father–child relationships at 12 months investigated as potential mediators of the indirect association.

The participants were a sample of 353 children and their parents. Mothers and fathers reported their interparental relationship adjustment on the Dyadic Adjustment Scale (DAS) when their child was 2 months old. When the child was 12 months old, they reported the quality of their child- relationship on the Parent–Child Dysfunctional Interaction subscale of the Parenting Stress Index – Short Form (PSI–SF). Children’s self-regulation was assessed at the age of 7–8 years using parent reports on three subscales of three questionnaires: the Attention subscale of the Five to Fifteen (FTF), the Inhibitory Control subscale of the Children’s Behavior Questionnaire (CBQ), and the Emotion Self-Regulation subscale of the Emotion Questionnaire (EQ). The measures of attention and inhibitory control were combined into a single index of behavioral self-regulation. The direct and indirect associations between interparental relationship adjustment and child behavioral and emotional self-regulation were tested within parallel multiple mediator models with mother–child and father–child relationships as mediators. The main analyses were performed using the PROCESS macro for SPSS.