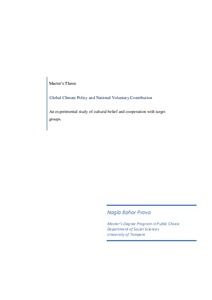 When we talk about global issues, the topic of ‘climate change’ has survived decades and ranks at the top of the list for being the most difficult to deal with. This paper presents an experimental setting to understand cross-cultural implications to the current global climate policy. It looks at some issues that may hinder the success of the Paris Agreement, specifically, considering the agreement’s national voluntary approach.

The research is based on theoretical perception of climate being a global public good which ensues collective action problem and that rationality defies voluntary contribution approach for climate change abatement. A threshold public good game experiment is designed under the framework of game theory and the unique nature of the global climate change regime, to empirically understand cultural differences and biases, and how they affect investment decisions towards a common good.

The results of the study show that people from China have significant difference in contribution, cooperation and beliefs, compared to their western counterparts. Moreover, the group behavior of the Chinese people is also significantly different than the others.

The study also serves as a post-policy analysis regarding some of the characteristics of the international climate change regime. A broader implication of this research can be considered to confirm, if, and to what extent. the national voluntary contribution approach of the Paris agreement will sustain, given that it requires cooperation of private actors.