Kyrgyzstan in the Eurasian Economic Union : Challenges and Opportunities 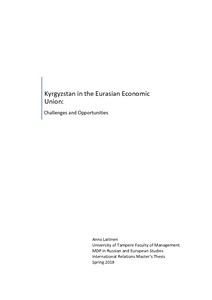 With its 27 years of independence Kyrgyzstan has experienced poor economic development and continues to suffer from bad governance as well as endemic corruption. The Kyrgyz economy lacks variety and is supported by only a few sectors. Since its independence Kyrgyzstan has aimed at balancing between the great powers and despite of having deep economic, social and cultural connections with Russia it also wants to maintain active relations with China and the Western countries. In 2015 Kyrgyzstan joined the Russian led Eurasian Economic Union with high hopes in receiving pulling aid to help with its economy and to secure domestic stability.

This study analysis the foreign policy of the Kyrgyz republic and its development along the years of its independence. In my research I have made use of the method of qualitative content analysis. Furthermore, the framework of neorealism theory has been used for the study, especially within the theory of bandwagoning, or aligning with the regional hegemonic power, of which I use to illustrate the foreign policy choices of Kyrgyzstan. I will provide answers to questions such as why Kyrgyzstan has decided to join the Union, what would have been the alternative path and what possibilities the membership provides for it.

With my research I have come to the conclusion that the Eurasian Economic Union is not only the best option for Kyrgyzstan in short-term and long-term, but it in fact is the only viable option for this poor and weak Central Asian nation lacking with capabilities.