Cùchulainn’s challenge : imageries and values in parliamentary debates on the Irish language Act in the Northern Ireland Assembly : an epistemic governance approach 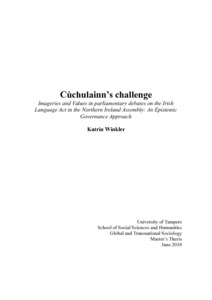 Northern Ireland, located in the province of Ulster on the island of Ireland but part of the United Kingdom, has a long history of violence between its communities and its society is engaged in a peace process dealing with the remnants of the civil conflict known as the Troubles to this day. The Troubles saw Catholic Irish nationalists and republicans fight with civil, political, and partly terrorist means against the discrimination they were subjected to by the governing Unionists. Division in society is not yet overcome and one aspect viewed by some as divisive is the Irish language. This thesis looks at the controversial debates around an Irish language Act in the Northern Ireland Assembly, which would safeguard the rights of Irish speakers in the community, however, which is strongly opposed by unionist parties in the Assembly, due to the language’s association to Irish separatist and terrorist movements.

The aim of this thesis is to contribute to epistemic governance literature and add research on the linguistic dimension of the conflict by studying how the approach can explain political actors’ argumentative behaviour in a local context. For this purpose, the thesis works with the case of the Irish language Act debate in the Northern Ireland Assembly. Qualitative research, namely political discourse analysis and value-based argumentation, is used to analyse official transcripts of parliamentary debates with direct references to an Irish language Act from Northern Ireland’s parliamentary session between 2007-2017.

Focusing on the third object of epistemic work, shared norms and ideals, the study found several arguments based on these common values and identified the usage of imageries by the various parties in the assembly. It showed that actors in the local sphere deploy the same imageries as predicted in the theory and that they are not bound to the usage of one single imagery. Interestingly, despite the opposing views in the debate, the actors apply the same mechanisms of governance in an attempt to persuade their audience of their cause.