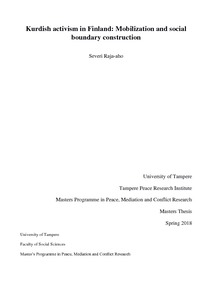 Increased migration of people and ideas with developed transportation and communication technology across nation state borders creates a transnational space where new forms of political activism are taking place. Diasporas, which are identity groups with political and cultural orientation to their perceived homeland, construct identities and adopt ideologies from their country of origin and mobilize politically to affect events in their perceived homelands. The Kurdish diaspora in Finland is one of the most organized and active diasporas in Finland. Past research on the diaspora has been from the perspective of migration and cultural studies, but the diasporas’ political mobilization remains largely under-researched.

This thesis approaches the topic from the perspective of peace and conflict studies and builds on a body of research that deals with conflict diffusion and diaspora mobilization that has focused on interaction between conflicts, diasporas, host and home countries. Based on previous research this thesis looks at how the Kurdish diaspora in Finland constructs social boundaries as part of their mobilization process. The data that is used is a series of nine semi-structured interviews with core members of the Kurdish diaspora in Finland. The data was analyzed using discourse analysis to distinguish membership categorization devices and to find in-group and out-group categories.

The thesis suggests that diaspora organizations and core members construct and maintain a pan-Kurdish identity that distinguishing itself from the Finnish majority. The core members construct boundaries based on political ideology within the Kurdish community in Finland. Two broad groups were distinguished in this study based on these categories: Apoists who connect themselves to the transnational PKK-movement and nationalists who maintain a more pan-Kurdish political outlook and separate themselves from Kurdish political parties. These two groups engage in outbidding where they gather support from Kurdish communities in Finland and from the Finnish civil society and decision makers. Their position to the host state affects the strategy of mobilization they adopted.

The results point to need for researching further on ideological adaptation and Kurdish nationalism among the Kurdish diaspora in Finland as well as nexus between the notion of belonging, conflicts, diasporas and mobilization as well as cyberspaces where political mobilization is taking place.